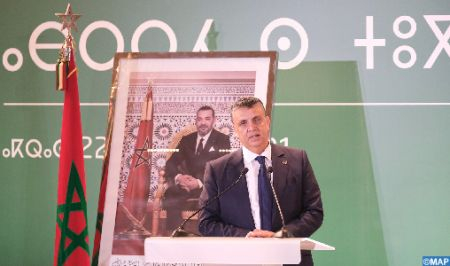 Secretary General of the Authenticity and Modernity Party (PAM), Abdellatif Ouahbi, emphasized, Wednesday in Rabat, the need, in the current situation, to form a strong and homogeneous government, capable of meeting the great expectations and aspirations of citizens on the economic and social levels. “We should present the model of a strong and homogeneous government that works on all fronts in the framework of a shared responsibility and that deals with the issues without delaying them,” said Ouahbi at a press briefing during which the head of government-designate, Aziz Akhannouch, announced the governmental majority that will be composed of the National Rally of Independents (RNI), PAM and the Istiqlal parties (PI). The secretary general of PAM, which came second in the legislative elections of September 8 with 87 seats, highlighted the common desire of the parties forming the government majority to establish a good model of a government that is consistent in its ideas and attitudes to all issues that arise, ensuring that its formation will contribute greatly to the achievement of this homogeneity of the Executive. Ouahbi commended, in this regard, the alliance between the three parties at the level of territorial institutions in order to give substance to homogeneous territorial bodies that are close to the citizen. He affirmed that PAM will act in good faith and with sincerity, integrity, boldness and clarity throughout the mandate of this government, adding that the will, courage and boldness will allow Morocco to stand out as a unique experience and will give proof to the world and Arab countries that the Kingdom deals with its problems in a democratic manner. The three parties that form the government majority have 270 seats, divided between RNI, which ranks first in the legislative elections with 102 seats, followed by PAM (87 seats) and PI with a total of 81 seats.