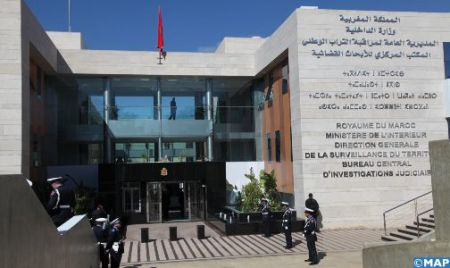 The Central Bureau of Judicial Investigations (BCIJ) under the General Directorate of Territorial Surveillance (DGST) arrested on September 16, 20 and 22, in close coordination with the elements of the National Police, four other individuals for their alleged links with the plans of the terror cell affiliated to the “Daesh” organization, dismantled in Errachidia on Sept. 14. The arrest of the four suspects was related to ongoing investigations into this case, conducted under the supervision of the prosecutor’s office in charge of terrorism cases in order to apprehend all members active in this terrorist cell, the elucidation of its ramifications and links on the national and international levels, as well as the identification of all its projects and destructive plans to seriously undermine public order, said a statement by the BCIJ. Preliminary data from investigations conducted by the BCIJ following the dismantling of this terrorist cell reveal that its members have pledged allegiance to the so-called emir of the organization “Daesh” and adhered to a campaign of enlistment and recruitment to their terrorist organization for which they chose the name “Jamaat Attawhid Al Islami Bi Al Maghrib”, said the same source. The members of this cell were preparing to perpetrate terrorist acts on the national territory, targeting security and military facilities and a list of officials working in security and military services and public administrations through the modus operandi of individual terrorism, either by poisoning or physical annihilation, the statement added. The members of this organization have expressed their willingness for recruitment and enlistment to join “Wilayate Khorassan”, considered as a new den of terrorist organizations. They also expressed their support and blessing to the terrorist operations that recently targeted the airport of the Afghan capital, noted the BCIJ. All the people arrested in connection with this cell, currently 7, have been placed in custody to complete the judicial investigation conducted by the BCIJ under the supervision of the competent prosecutor.