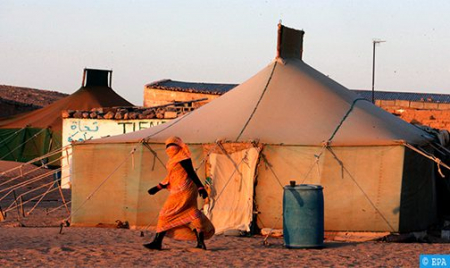 Several NGOs that took part in a webinar organized in Geneva on the sidelines of the 48th session of the Human Rights Council (HRC) condemned the impunity enjoyed by those responsible for crimes of torture, enforced disappearances and serious human rights violations in the Tindouf camps. During this virtual panel, held on Wednesday, the speakers highlighted the abuses perpetrated by the Polisario militias in the Tindouf camps, denouncing in particular the enforced disappearances, the cruel and inhuman treatment of opponents in jails, the incessant persecution of human rights defenders, embezzlement, recruitment of children, and prohibition of freedom of movement. They called on the international community, international organizations and all peace-loving forces to intervene to put an end to these violations and other inhuman practices perpetrated against the Sahrawi populations held against their will in the desert in Tindouf, while underlining the need to shed light on the fate of all those missing and bring to justice all those responsible for these crimes. The meeting, moderated by the president of the organization ACI Human Rights (endowed with Consultative status within the UN), Dianko Lamine, was marked by testimonies from former victims of the Polisario who spoke about inhuman treatment, violence, humiliation and repression, torture as well as physical and psychological punishments perpetrated by the separatists in these camps against populations held against their will in Tindouf Camps.  The president of the Independent Human Rights Commission, Lahcen Naji, slammed, in this regard, the use by the Polisario militias of violence and repression to prohibit the exercise of the freedom of assembly, of association and displacement in Tindouf camps. Mrs. Nour Bouhanana, president of the New Generation Foundation for Human Development, expressed her great concern over the massive recruitment of child soldiers into the Polisario militias, noting that these children are “enlisted and indoctrinated without mercy and without any moral responsibility”. Mr. Zine El Abidine El Ouali, president of the African Forum for Research and Study on Human Rights, urged the international community to intervene to lift the blackout on systematic violations of human rights in the Tindouf camps. The Sahrawi human rights defender and ex-detainee in the Polisario jails, Fadel Breika, denounced, for his part, the climate of terror, intimidation and repression prevailing in the camps, calling on the international community to intervene to put an end to the rule of lawlessness in these camps, to kidnappings and torture in detention centers. The president of the Sahrawi association against impunity in the Tindouf camps, Lemaadla Mohamed Salem El-Koury, denounced the enforced disappearances and the violations committed by the armed militias of the Polisario. Ms. El Koury, who gave a testimony on the case of her father, missing in the Tindouf camps, denounced the impunity enjoyed by torturers and perpetrators of serious human rights violations and acts of kidnapping in the separatists’ camps.