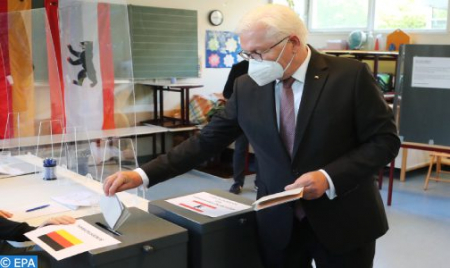 The Social Democrats (SPD) is ahead in the German federal election with over 25 percent, according to voting results released by the electoral commission after data from all the districts had been processed. SPD has 25.7 percent, while the conservatives’ bloc consisting of German Chancellor Angela Merkel’s party – the Christian Democratic Union of Germany (CDU) – and the Christian Social Union (CSU) is second with 24.1 percent. The Greens are third with 14.8 percent, while the Free Democratic Party (FDP) is fourth with 11.5 percent. The Alternative for Germany (AfD) party is fifth with 10.3 percent. The Left (DIE LiNKE) failed to make it past the 5 percent threshold. The CDU/CSU block got 8.8 percentage points less than in 2017, while the SPD improved their result by 5.2 percentage points and the Greens gained 5.7 percentage points. Meanwhile the AfD lost 2.3 percentage points, while DIE LiNKE lost 4.4 points. Both CDU leader Armin Laschet and SPD leader Olaf Scholz said that a three-way coalition was the likeliest outcome of the election, apparently ruling out a new Grand Coalition of their two parties.  Laschet said he preferred an alliance of centrist parties.