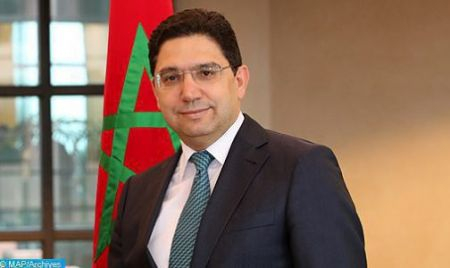 Minister of Foreign Affairs, African Cooperation and Moroccans Abroad, Nasser Bourita stressed, Monday, that Morocco will continue its efforts for a peaceful solution in Libya and for a just, comprehensive and lasting peace in the Middle East. Driven by history, the community of destiny and the momentum created by the Skhirat Political Agreement, the Kingdom will continue its efforts for a peaceful solution to the crisis in Libya, said Bourita, in video conference, during the speech of Morocco at the High-Level Segment of the 76th session of the United Nations General Assembly. He also noted that in accordance with the High Instructions of HM King Mohammed VI, Morocco will always stand on the side of the legitimate Libyan institutions and support international efforts to find a solution to the crisis in this Maghreb country within the framework of what has been agreed between the various Libyan parties, adding that the Kingdom remains convinced that the settlement of the crisis in Libya can only be done by the Libyans themselves, away from external interventions and agendas. The inter-Libyan dialogue is the right way to achieve the aspirations of the Libyan people for stability, national reconciliation and development, he said. The minister further noted that the Kingdom is convinced of the extreme importance of holding elections in Libya as a decisive step on the road to achieving peace, adding that Morocco is ready to provide the necessary support in coordination with all Libyan institutions. Moreover, he insisted that Morocco, through a strong and continuous commitment in support of peace in the Middle East, places the Palestinian issue and the Holy City of Al-Quds at the top of its priorities and this, in the same rank as the issue of its territorial integrity. The Kingdom aspires to a just, comprehensive and lasting peace in the Middle East, which leads to the establishment of a Palestinian State on its national territory within the June 1967 borders with East Al-Quds as its capital, living in peace and security, side by side with the State of Israel, he added. Morocco believes that this hope is dependent on the realization by all that neither side will be able to fully enjoy its security until it is provided for the other side, said the minister, indicating that this requires a courageous agreement to relaunch the peace process and put an end to all forms of violations and provocations that only exacerbate hostility and distance the prospects of understanding and dialogue. He also stressed that Morocco, whose HM King Mohammed VI chairs the Al Quds Committee, reiterates its constant and principled position on the need to preserve the distinguished legal, historical and spiritual status of the Holy City to make it a land of coexistence between the followers of monotheistic religions and a factor of rapprochement between peoples, and strengthening peace and stability in the region. Bourita concluded that Morocco, convinced that peace brings peace, works for peaceful and healthy relations with the State of Israel, able to help promote peace in the region, strengthen regional security and open new opportunities for the entire region, as indicated in the Tripartite Declaration between Morocco, Israel and the United States, signed before His Majesty the King on 22 December 2020.