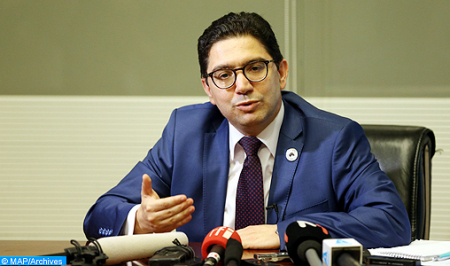 The challenge of vaccination against the new coronavirus represents an opportunity to give new impetus to multilateralism in the world, said Monday minister of Foreign Affairs, African Cooperation and Moroccans Abroad, Nasser Bourita. “The challenge of vaccination today, as the last line of defense against the pandemic, is rightly an opportunity to achieve our willingness and ability to give new impetus to multilateralism,” said Bourita, via video conference, during Morocco’s speech at the High-level Segment of the 76th United Nations General Assembly. Highlighting the enormous effort made by scientists and researchers to develop safe and effective vaccines, the minister stressed that the ultimate goal is to ensure universal access to the vaccine as a “common good of humanity”, and ensure its equitable distribution among all countries of the world. The equitable distribution of the vaccine goes beyond the “ethical duty” and is one of the requirements of the “collective security” on which the multilateral organization is based, he said, warning that the lack of vaccines in one region of the world is a temporary focus announcing a large-scale epidemiological relapse. This relapse, the minister said, could have serious repercussions on national economies and the well-being of societies. Bourita also said that Morocco welcomes the sustained work of the World Health Organization (WHO), UNICEF and relevant UN agencies to ensure global and equitable access to vaccines against Covid, while supporting the campaign “Only Together” launched by the UN Secretary General and which calls for ensuring vaccines for all. The pandemic revealed several dysfunctions in multi-stakeholder governance, the minister went on, noting that at a time when national policies are at the forefront of international efforts to combat the spread of Covid-19, multi-stakeholder action was not up to the challenge. For Bourita, it is imperative to work together to establish a new global order that serves as a platform for effective joint action, which goes beyond declarations of intent and “intellectual advocacy” to pave the way for a stage of “transformative mobilization”, through a practical roadmap that strengthens collective security and responds to current and future challenges. In addition, the minister stressed the need to seriously address the issue of mutual recognition of available vaccines and those to be produced, and this on the basis of practical, health and ethical standards enjoying international consensus, far from political and commercial calculations. He also said that Morocco, which supports the development of an international convention on pandemics within the framework of the WHO, intends to organize an international congress in 2022 on pandemic preparedness, in collaboration with Rwanda, the WHO and the World Bank. The goal is to consolidate international efforts to strengthen countries’ capacity to fight these pandemics and prepare for emergencies. The Kingdom, in accordance with the high instructions of HM King Mohammed VI, has implemented an ambitious project to manufacture vaccines against Covid, the minister noted, adding that this structuring project goes beyond strengthening the health sovereignty of Morocco to contribute to the health security of African countries.