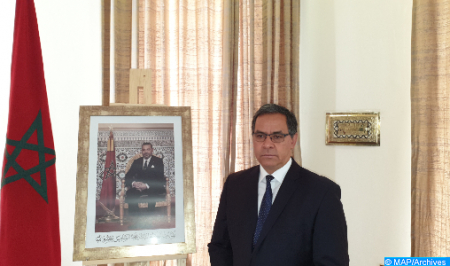 The Permanent Representatives Committee (PRC) of the African Union (COREP) began, Tuesday in Addis Ababa by videoconference, its 42nd ordinary session with the participation of Morocco, as a prelude to the next Executive Council of the Pan-African organization. The Ambassador, Permanent Representative of the Kingdom to the African Union and UNECA, Mohamed Arrouchi, leads the Moroccan delegation to this session, which will discuss the draft reports and prepare the agenda for the next ordinary session of the Executive Council (Foreign Ministers). During this session, the PRC will focus in particular on the report of the Audit Sub-Committee, the report on the operationalization of the African Centres for Disease Control and Prevention (Africa CDC) and the report of the Sub-Committee on Multilateral Cooperation. The PRC will also examine the report of the sub-committee on the structural reforms of the Union and another on the state of regional integration in Africa. Speaking at the opening session, the Chairperson of the AU Commission, Moussa Faki Mahamat, stressed that the framing of the process of the implementation of the institutional reforms of the AU is at the heart of the PRC work while welcoming the results achieved so far. “The legal and administrative instruments that you have proposed for the validation of our deliberative bodies will give a soul to this reform, it will emancipate itself from a theoretical consideration to be part of reality”, said Moussa Faki Mahamat. The Permanent Representatives Committee (PRC) comprises Permanent Representatives to the Union and other plenipotentiaries of Member States. The PRC conducts the day-to-day business of the African Union (AU) on behalf of the Assembly and Executive Council. It reports to the Executive Council, prepares the Council’s work and acts on its instructions.