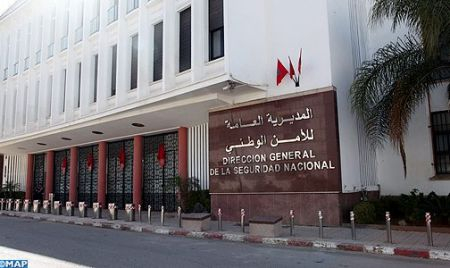 Elements of the Nador judicial police have dismantled, Tuesday, based on accurate information provided by the services of the Directorate General of Territorial Surveillance (DGST), a criminal network active in international trafficking of cocaine and heroin by sea. The intervention operations, which involved officers of the judicial police and elements of law enforcement, have led to the arrest of two individuals suspected of links with this criminal network, said a statement by the National Police (DGSN), adding that the first was apprehended in the vicinity of the region “Beni Chiker” red-handed while transferring nearly 06 kilograms of cocaine and 05 kilograms of heroin on board a light car. The second individual, suspected of being the carrier who ensured the trafficking of drugs seized aboard a boat off the city of Mellilia, was arrested in the area of “Rass Wark” near “Beni Chiker”. The searches carried out in two houses located in the region of Farkhana and belonging to the main suspect on the run abroad, allowed the seizure of two cars and a large sum of money in national and European currency suspected to be originated from drug trafficking, the statement said. The investigation revealed that the activity of this criminal network extends to several European countries, from the Netherlands through Barcelona and Mellilia, says the DGSN, noting that the hard drugs are transported aboard pleasure boats to the coast before being handed over to transporters working on board a fishing boat to introduce them into the national territory. The two suspects were placed in custody to complete the investigation conducted under the supervision of the prosecutor’s office, to identify all persons involved in the activities of this criminal network, to elucidate the ways of trafficking adopted and determine the possible links at national and international levels, concluded the same source.