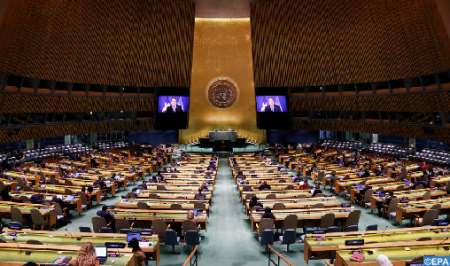 The flagrant human rights violations committed by the polisario against the detained populations in Tindouf camps (southwestern Algeria), were heavily denounced on Wednesday in New York, before the United Nations General Assembly Fourth Committee. “The suffering in the Tindouf camps is perpetuated and exploited by the separatist front,” said Karen Hardin, a US petitioner representing Priority PR, noting that the people who suffer in these camps are excessively exploited by polisario leaders. A Sahrawi child in the camps lives in “incredibly” difficult conditions while the children of the separatist leaders “are more fortunate,” she said, noting that after decades of personal enrichment, the separatists have acquired properties in several parts of the world, allowing their families to live in luxurious comfort. The American petitioner also noted how the testimonies of several Sahrawi victims of polisario abuses have finally attracted the attention of international human rights organizations, pointing out that evidence of abductions, imprisonment, forced labor, torture and rape have all come to light. “The seriousness of the crimes perpetrated by the separatists cannot be underestimated or concealed. This is a common polisario practice,” she said, calling for an investigation into these abuses as well as into the separatists’ ideology.