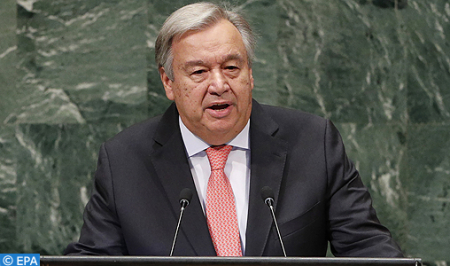 The Secretary-General of the United Nations, Antonio Guterres, highlighted, in his report to the Security Council on the Moroccan Sahara, published in the 6 official languages ​​of the United Nations, the Royal letter underlining the “irreversible” nature of the peaceful actions carried out by Morocco at the border post of El Guerguarate to restore free civil and commercial movement. In this regard, the UN Chief informed the Security Council members of the letter sent to him by HM King Mohammed VI on November 21, 2020, in which the Sovereign underlined that the actions undertaken by Morocco in El Guerguarate were “irreversible”, while reaffirming the Kingdom’s commitment to the ceasefire. Referring to the illegal violations of the Polisario mercenaries in Guergarate in October and November 2020, Mr. Guterres said that since October 22, 2020, “reconnaissance operations by Minurso helicopter over El Guerguarate have noted the presence in the buffer strip of 12 armed members of the Polisario in military uniform,” in addition to “8 military vehicles, two of which were equipped with heavy weapons”. The UN Secretary General said that the “Polisario” was informed, by Minurso, that its presence in El Guerguarate constituted “a violation of the Military Agreement No. 1” while enjoining it to remove military personnel and vehicles from the buffer strip. He also mentioned another letter sent to him by HM the King on November 12, 2020, in which the Sovereign urged the UN Chief to “increase efforts to quickly and definitively put an end to intolerable acts of provocation and destabilization made by the Polisario,” adding that Morocco, “in the respect of its attributions, by virtue of its responsibilities and in full compliance with international legality, reserves the right to act, at the time and in the manner it deems necessary, in order to safeguard the status of the zone and restore free movement in El Guergarate.” Regarding the peaceful intervention carried out by the Royal Armed Forces to restore the flow of traffic in this border post, Mr. Guterres said “that no victim was reported to Minurso” during the events of November, 13. The UN Chief added that following the intervention of the FAR, the armed elements of the “Polisario” suddenly fled the buffer zone of Guergarate. The peaceful nature of this operation was confirmed by Ambassador Omar Hilale, Morocco’s Permanent Representative to the UN, in two letters to the Security Council in November 2020. In these two letters, the diplomat underlined that the action carried out by the Royal Armed Forces, aimed at putting a definitive end to the inadmissible violations by the “Polisario” of the cease-fire, of the military agreements and of the resolutions of the Security Council, in El Guergarate, took place peacefully, adding that this action took place in the presence of MINURSO, which observed it fully. These unequivocal statements by the UN Chief on the presence of heavily armed militias of the “polisario” in Guergarate last October and November are a fierce denial of the fallacious allegations of this armed separatist group and its Algerian sponsor who claimed that only civilians were in Guergarate at that time. This confirmation by the UN Secretary General and MINURSO reinforces the peaceful and legitimate action undertaken by Morocco in Guergatate to chase out “Polisario” mercenaries from the region. This action which has been welcomed by the international community, in particular by a very large number of countries and international, regional governmental and non-governmental organizations.