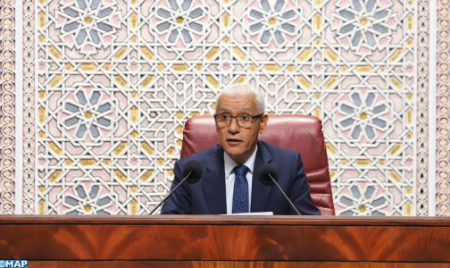 The 11th legislature (2021-2026) paves the way for a new stage of democracy building and institutions consolidation, said Saturday, the new speaker of the House of Representatives, Rachid Talbi Alami. This legislature inaugurates a new stage to pursue the development of the Kingdom which stands out as an emerging country and unique model in its environment under the leadership of HM King Mohammed VI, said Talbi Alami in an address on the occasion of his election to the presidency of the lower house, noting that the Sovereign leads Morocco with wisdom and farsightedness to position it among the democratic and developed countries, enjoying prosperity and social and territorial justice. The election of September 8 was a decisive step in the history of Morocco on the political and institutional levels, in that it allowed the emergence of new majority and opposition, as well as facilitated the entry of new elites to the elected institutions and at their head the House of Representatives, he said, highlighting the concern of His Majesty the King to ensure the regular holding of elections and the renewal of institutions in full compliance with the Constitution and democracy. Talbi Alami said he was convinced that this royal will to ensure the proper functioning of constitutional institutions and preserve the democratic choice is a catalyst that will instill a new dynamic for the continued mobilization behind HM the King to meet the internal and external challenges facing the Kingdom and win the stakes of the new stage.