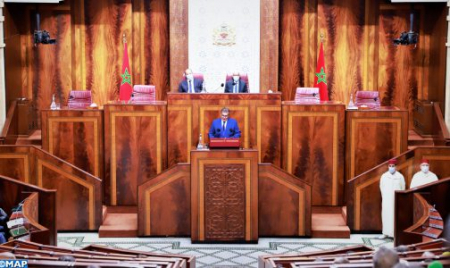 The government will continue to support the development process in the southern provinces of the Kingdom and honor all its related commitments, said Monday in Rabat, head of government, Aziz Akhannouch. During a joint session of the two Houses of Parliament, devoted to the presentation of the government program, in accordance with Article 88 of the Constitution, Akhannouch stressed that the Executive will also work to accelerate the implementation of various plans and development programs developed in “the framework of our territorial integrity and supported by our choices of advanced regionalization”. He noted in this regard that the government will also consolidate the advanced regionalization as a “constitutional and democratic choice and alternative to the shortcomings of centralized and concentrated public policies relating to territorial disparities,” especially with regard to investment and access to basic public services and their impact on the equitable distribution of wealth between regions. The Executive, he went on, will work on the transfer of broad prerogatives of the State to the regions, through the conclusion of contractual programs State-regions, according to a results-oriented approach, while ensuring the financial and administrative autonomy of the region, in order to turn it into a real economic hub and lever of human development and social advancement and major partner of the State. Akhannouch insisted that the government will remain mobilized behind HM King Mohammed VI, the guarantor of the country’s unity, to definitively settle the Moroccan Sahara issue, through the clear recognition of national sovereignty and the proclamation of the political solution presented by Morocco, which has received the support of the international community. He stressed that the Executive remains “firmly attached to the constant values of the nation, the democratic choice and the sacredness of the full sovereignty of our country, while being aware of the constraints of external challenges,” emphasizing the diplomatic achievements made under the leadership of HM the King, relating, among others, to the Moroccan proposal for serious and credible autonomy, the U.S. recognition of the Moroccanness of the Sahara, the pace of foreign diplomatic representation in our southern provinces and the enshrining of the radiant image of our country on the African continent and international forums. The government will spare no effort to implement the Royal High Directions, in order to provide the Royal Armed Forces with all the means to enable them to carry out their missions in the defense of the country’s unity and territorial integrity, in the preservation of peace and stability and the security of citizens, as well as the missions in which they participate in the framework of peacekeeping and security operations in the world, he underlined.