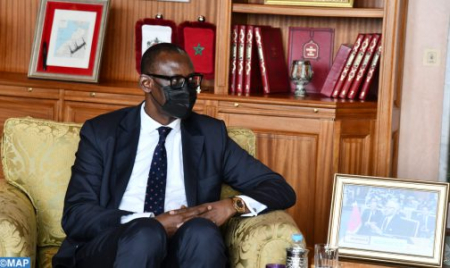 The Malian Minister of Foreign Affairs and International Cooperation Abdoulaye Diop reiterated, Monday in Rabat, the constant position of his country in favor of a just and lasting political solution, under the auspices of the UN, to the dispute over the Moroccan Sahara question. Speaking at a press conference following his meeting with Minister of Foreign Affairs, African Cooperation and Moroccans Abroad, Nasser Bourita, Diop reaffirmed the “constant and unambiguous” position of Mali “which is in full and complete adherence to the process conducted under the auspices of the United Nations to find a peaceful, fair, sustainable and acceptable political solution,” to this question. Diop also stated that his country will not undertake actions that is against the interests of Morocco on this issue. The head of Malian diplomacy handed to Bourita a written message from the transitional president of Mali Assimi Goïta, to His Majesty King Mohammed VI. On the occasion, the Malian Foreign Minister expressed his honor to “hand over to the very high attention of HM King Mohammed VI the message of peace, friendship, solidarity and fraternity sent to him by His Excellency Assimi Goïta, Transitional President and Head of State of Mali, with his fraternal greetings as well as his heartfelt wishes for happiness to HM the King and continued progress and prosperity for the brotherly people of Morocco”.