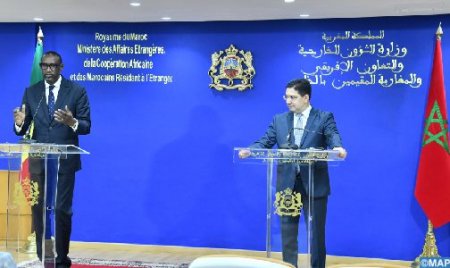 The Malian government is committed to doing everything possible to identify and prosecute those responsible for the murder of two Moroccan truck drivers in Mali, said Monday in Rabat, Minister of Foreign Affairs and International Cooperation Abdoulaye Diop. Speaking at a press conference following his meeting with Minister of Foreign Affairs, African Cooperation and Moroccans Abroad, Nasser Bourita, Diop stressed that this is a “barbaric act perpetrated by the enemies of peace and development of our two countries.” He also extended “the condolences of the transitional president Assimi Goïta, the government and the population of Mali to HM King Mohammed VI, the government and the people of Morocco” following this loss. The head of Malian diplomacy stated that “these acts should not discourage us”, adding that “they are there to remind us of the danger we live with every day”.