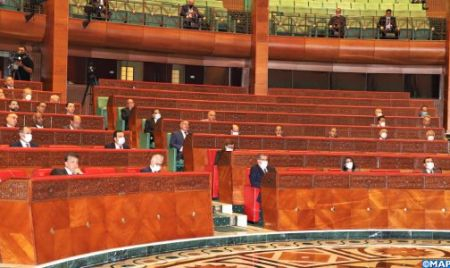 The government program is integrated, ambitious and includes clear priorities, stressed Wednesday the majority groups in the House of Advisors during a plenary session devoted to the discussion of the program. During this session, which took place in the presence of the head of government, Aziz Akhannouch, the group of the National Rally of Independents (RNI) considered that the government program is harmonious and consistent with the electoral platform of the party, which is realistic and sets the priorities that meet the absolute needs expressed by citizens. At the top of these priorities, the RNI group cited social protection as a system that preserves dignity and creates jobs, noting that the government program is integrated, ambitious and tackles the crises with boldness. For its part, the Authenticity and Modernity group stressed that the government coalition has presented a serious and realistic socio-economic program, which is closely linked to the specificities of the stage that Morocco is going through, noting with satisfaction that this program has defined a clear roadmap and aggregating quantified and ambitious macro-economic indicators. The Istiqlali group of Unity and Egalitarianism, meanwhile, considered that the government’s program is clear in its content and precise in its goals and objectives, stressing that it represents “the intersection between the parties forming the majority and a consensual document of our collective vision of the management of public affairs for the next five years, through many proposals and measures (…), which makes it a program with a strong political reference”. As for the Constitutional, Democratic and Social grouping, it expressed the hope that the new cabinet is “a government of action and initiatives”, noting that it has all the working tools, in addition to the main reference which is the new development model. The government is thus called upon to ensure the quality of the implementation of major projects, according to the grouping.