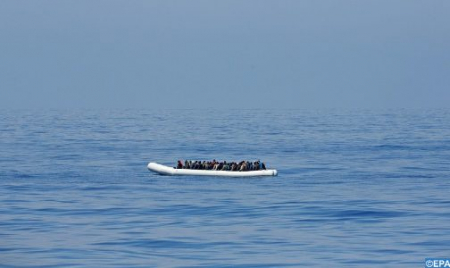 The local authorities and security services in the province of Tarfaya thwarted, from Friday to Sunday, four illegal immigration attempts to the Canary Islands and arrested 43 people. Thus, six Moroccan would-be illegal immigrants were arrested Friday, in addition to the seizure of an inflatable boat, according to local authorities. On Saturday, 12 people who were preparing to take the sea to the Canary Islands were apprehended in the town of Akhfenir. According to the same source, this operation has led to the arrest of two organizers of this attempt operating within a criminal network specializing in human trafficking among others. In addition, a car used for the transport of candidates for illegal immigration has been seized, as well as 20 cell phones. The thorough search of the organizers’ homes also led to the seizure of 300 grams of chira and 1.5 Kg of cannabis resin. On the same day, 10 people who were preparing to immigrate illegally were arrested in the town of Daoura. On Sunday, security services arrested 13 candidates for illegal immigration and seized an inflatable boat and two engines off the commune of Daoura. Royal Gendarmerie of Tarfaya has opened a judicial investigation into this case under the supervision of the competent prosecutor’s office. The security services have intensified over the past weeks control operations as part of the fight against illegal emigration in the region of Laayoune-Sakia El Hamra, which led to the arrest of several would-be illegal immigrants and the rescue of several boats adrift.