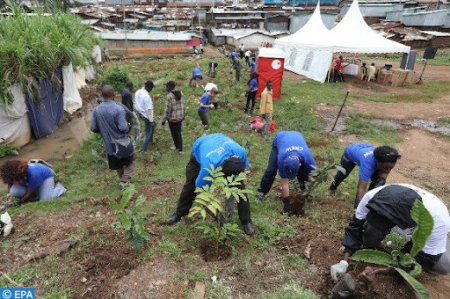 In a stunning development following the United Nations General Assembly’s 76th Session in September, the UN Human Rights Council announced in a resolution that a “clean, healthy, and sustainable environment” is a human right. Yet, despite the importance of this declaration for the future of planet Earth, like other human rights that are routinely violated, this new “right” may well be observed more in the breach than in reality, and the consequences for future generations will be significant. The Human Rights Council’s adoption of the resolution fit neatly into the theme of this year’s UN General Assembly, held both virtually and in-person in New York from September 21-27: “building resilience through hope—to recover from COVID-19, rebuild sustainability, respond to the needs of the planet, respect the rights of people, and revitalize the United Nations.” The UN Environment Assembly, which met during the UN General Assembly for only the fifth time, declares on its website: “we are losing nature at an alarming pace.” It has called for “strengthened action to protect and restore nature and the nature-based solutions to achieve the sustainable development goals.” These are ambitious goals to say the least, but few thought that the UN Human Rights Council would recognize on October 8, the notion that having a clean, healthy, and sustainable environment is a “human right.” While some still deny the existence of climate change, scientists around the world believe that climate change is affecting every country on every continent, disrupting national economies, and affecting people’s lives right now to an extraordinary extent. Without significant action taken now to reverse or mitigate climate change, predictions for the future are dire. So what is climate change? Put simply, it is the change in the average weather conditions in a place measured over many years. While that definition may sound too sterile to be dangerous, in fact, the Earth is now in a period of significant climate change with global temperatures rising persistently around the world. According to the National Aeronautics and Space Administration (NASA), one of the world’s leading climate research agencies, the changes from global warming that scientists predicted decades ago are happening right now: loss of sea ice, accelerated sea level rise, and longer, more intense heat waves. Moreover, global temperatures will be rising for many more decades, primarily because of greenhouse gases produced by human activities, and the situation will only worsen over time. According to the agency, the changes we are seeing now—and indeed have already seen, are “irreversible on the timescale of people alive today.” Many believe that time is running out. Calling out “so-called” leaders for empty promises and ineffective words, Greta Thunberg, who became the World’s youngest climate activist several years ago at the age of 16, told an international Youth4Climate summit in Milan on September 30, “We’ve now had 30 years of blah blah blah, and where has that led us?” Thunberg is not alone in that view. Special U.S. climate envoy John Kerry’s message to world leaders who were also meeting in Milan to assess country pledges in advance of COP26 was similar: “Stop the BS.” U.N. special rapporteur on human rights and the environment David Boyd noted that the “global environmental crisis causes more than nine million premature deaths every year.” The notion that having a clean environment is a human right was first taken up by the Human Rights Council in the 1990s, but it took 30 years to finally adopt the concept in a resolution. While Boyd has called the decision a “historic breakthrough,” an HCR resolution without implementation is simply more words. Michele Bachelet, the UN High Commissioner for Human Rights, has called for “bold action” to ensure the recognition of the “right” to a healthy environment becomes a “springboard to push for transformative economic, social and environmental policies that will protect people and nature.” Bachelet decried a false separation between environmental protection and the protection of human rights. She said neither “can be achieved without the other” because environmental degradation and climate change are “interconnected” with human rights crises. To redress these issues requires a “balanced, human rights-based approach to sustainable development.” Friday’s resolution is not legally binding. While it does have the potential to shape global standards, the proof will be in the pudding, and it will be up to each individual member country’s leaders not only to adopt policy but to take action to implement it. The US did not vote on the resolution because it is not a member of the Human Rights Council.