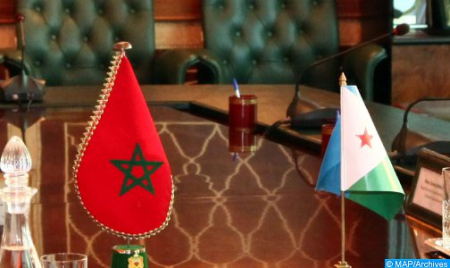 The means to strengthen relations between Morocco and Djibouti were at the center of talks, Thursday in the Djiboutian capital, between a delegation of Moroccan MPs and president of the Djiboutian National Assembly, Momaed Ali Houmed. Chaired by Mohamed Touimi Benjelloune, the Moroccan parliamentary delegation, which participates in the 76th session of the Executive Council and the 43rd Conference of the African Parliamentary Union (APU), which are held in Djibouti, discussed with Momaed Ali Houmed, who is also the current president of APU, ways to further strengthen relations between the two countries, especially in the legislative and parliamentary fields. After reviewing the excellent relations of cooperation between the two countries, in particular in the academic, judicial and health fields, the two parties agreed, to form, in the days to come, groups of parliamentary friendships, in order to boost the common parliamentary action in the two countries. Touimi and Houmed also discussed the possibilities of exchanging visits of parliamentary delegations and concluding a memorandum of understanding between the two legislative powers, with the aim of giving new impetus to relations between the parliamentary houses of the two countries. Both officials welcomed, by the same occasion, the excellent relations linking the two countries at the political level and the exchange of support between the two parties in vital issues, such as the territorial integrity and national sovereignty of each country. They also raised the difficulties encountered by the Pan-African Parliament, emphasizing the need to redouble efforts, for more coordination and consultation, in order to overcome the impasse in which it now stands.