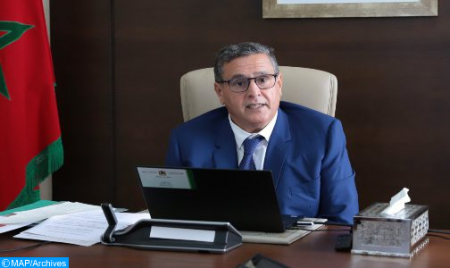 A Government Council will be held on Saturday under the chairmanship of the Head of Government, Aziz Akhannouch, with on the agenda a presentation by Minister of Economy and Finance on the preparatory measures relating to the elaboration of the 2022 Appropriation Bill. The Council will then consider a draft organic law amending and supplementing the organic law on the appointment to senior positions in accordance with the provisions of Articles 49 and 92 of the Constitution, said the Department of the Head of Government in a statement. The Council will also examine the protocol amending the Council of Europe Convention No. 108 for the Protection of Individuals with regard to Automatic Processing of Personal Data, signed on October 10, 2018 in Strasbourg, with a bill approving the said protocol. In addition, the meeting will be devoted to the review of two cooperation agreements between the Government of the Kingdom of Morocco and the Government of the State of Israel, signed on August 11, 2021 in Rabat, the first concerning air services with a draft law approving this agreement while the second provides for cooperation in the fields of culture and sports, the statement added. The meeting will also consider the agreement establishing the African Monetary Fund, adopted on May 28, 2007 in Abuja, as well as the bill to approve the agreement. The Council will conclude its proceedings by examining the Charter of the African Cultural Renaissance, adopted at the 6th Ordinary Session of the Conference of Heads of State and Government of the African Union (AU) in Khartoum on January 24, 2006, and the bill approving the said Charter, according to the same source.