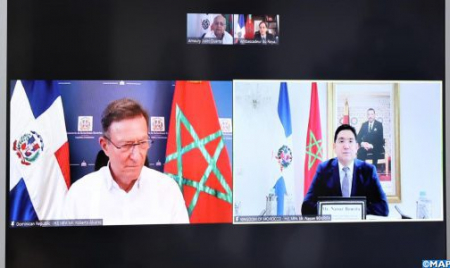 The Kingdom of Morocco and the Dominican Republic on Monday reaffirmed the need to strengthen multilateral diplomacy through joint and effective collaboration. In a joint declaration issued at the end of talks held by videoconference between the Moroccan minister of Foreign Affairs, African Cooperation and Moroccans Abroad, Nasser Bourita, and his Dominican counterpart, Roberto Alvarez, the two sides underlined the important coordination role of the United Nations in the management of world affairs, such as disarmament and non-proliferation, respect for human rights and protection of the environment. In this regard, the Kingdom of Morocco commended the fruitful work carried out by the Dominican Republic at the United Nations as a non-permanent member of the Security Council for the period 2019-2020, making a significant contribution to the promotion of dialogue, understanding, the preservation of peace and the search for peaceful solutions, the document says. The Kingdom of Morocco also congratulated the Dominican Republic for having assumed the Pro Tempore Secretariat Pro Tempore of the Ibero-American Summit during the next two years, the declaration says, adding that it is a testimony of confidence and support to the Dominican authorities by the member countries with a view to leading a major regional alliance for development. The Kingdom underlined the key role of the Dominican Republic through its involvement in the regional integration processes and the consolidation of the values ​​of democracy, dialogue and regional security as a Member State of the Central American Integration System (SICA) and its many Pro-Tempore presidencies. In this regard, Mr. Bourita expressed his satisfaction and his willingness to continue collaboration with the SICA Forum, as an observer member, as well as within the framework of the Memorandum of Understanding concluded between the two parties in April 2019, relating to the establishment of a forum for political dialogue and cooperation between SICA member countries and the Kingdom of Morocco.