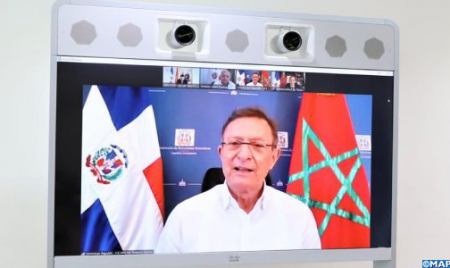 The Dominican Republic reaffirmed on Monday its support for Morocco’s efforts in the search of a political solution to the Moroccan Sahara issue. “The Dominican Republic reaffirmed its respect for the territorial integrity of the Kingdom of Morocco and its national sovereignty and supports Morocco’s efforts in the search of a political solution aimed at putting an end to this regional dispute”, says a joint declaration issued at the end of bilateral talks held by videoconference between the Moroccan minister of Foreign Affairs, African Cooperation and Moroccans Abroad, Nasser Bourita, and his Dominican counterpart, Roberto Alvarez. According to the joint declaration, the Dominican Republic considers that the Autonomy Initiative, presented by the Kingdom of Morocco in 2007, constitutes “the realistic, credible and serious solution to achieve a negotiated outcome between the parties”. This virtual meeting between Bourita and Alvarez takes place following the last meeting held between the two sides in June 2019, in Santo Domingo, and is part of a common desire to pursue a continuous political dialogue to strengthen bilateral relations and give a new impetus to cooperation in various areas of common interest.