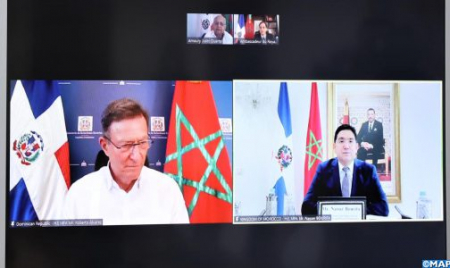 Minister of Foreign Affairs, African Cooperation and Moroccans Abroad, Nasser Bourita, held talks on Monday by videoconference with the minister of Foreign Affairs of the Dominican Republic, Roberto Álvarez. The two ministers welcomed last December’s commemoration of the 60th anniversary of the establishment of diplomatic relations between the two countries, expressing their satisfaction with the excellent bilateral relations, based on strong ties of friendship, brotherhood, solidarity and cooperation, and strengthened by the visit of His Majesty King Mohammed VI to the Dominican Republic in 2004, said a statement from the ministry of Foreign Affairs, African Cooperation and Moroccans Abroad. The two parties also praised the agreement, concluded in June 2019, on the reciprocal exemption of tourist and business visas for nationals of both countries, which came into force in July 2021. On this occasion, the Dominican top diplomat welcomed the success of the general, regional and local elections held in Morocco in September 2021, which were conducted in democratic conditions marked by a strong participation, especially in the southern provinces of the country, stresses the statement. Regarding the Moroccan Sahara issue, Mr. Álvarez reiterated his country’s firm and unwavering support to the territorial integrity of Morocco and its efforts to achieve a political solution to end this regional dispute. In this regard, he stressed that the Dominican Republic considers that the Autonomy Plan, proposed by the Kingdom of Morocco in 2007, is the realistic, credible and serious solution to achieve an outcome that is negotiated between the parties, the statement says. During the meeting, which was marked by the signing of a joint statement, Mr. Bourita praised the successful work done by the Dominican Republic at the UN as a non-permanent member of the Security Council for the period 2019-2020, making a significant contribution to the promotion of dialogue, understanding and peace. Within the framework of the development of South-South cooperation, both parties expressed their determination to further strengthen their collaboration and decided to meet again for political consultations in the first half of 2022, the statement concludes.