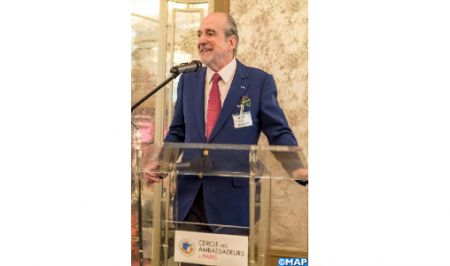 The decision rendered by the European Union (EU) court on September 29 on the appeals lodged by the “polisario front” against the decisions of the European Council regarding the agreements between the EU and Morocco is incomprehensible and heralds great dangers for a Union already battered by its internal management difficulties and its inability to play a real role on the international scene, underlined ambassador Jean Paul Carteron, Chairman and Founder of the Crans Montana Forum. “In Brussels, will the management of affairs henceforth systematically bow to the interference of judges who, whatever their great capacities as jurists, have no idea of the need of the moment, of the appropriateness of decisions to be taken and which are the sole responsibility of politicians and especially have no legitimacy to interfere?” , said Carteron in an analysis in reaction to the European Court of First Instance’s decision on the agriculture and fisheries agreements with Morocco. For the chairman and founder of the Crans Montana Forum, “there is already the question of the admission to act of a political movement, a well known false nose of a government (Algeria) which for more than 40 years has been advancing masked in its work of destabilization of a whole region”. He added that the European Union is a serious institution! We cannot receive a legal action from the “polisario” for the simple reason that it is an opportunistic movement, without foundation, whose only existence and legitimacy are based on forty years of unilateral and noisy assertions of its alleged representativeness. By dint of shouting in all directions, some end up believing in it and seeing a reality. Others, in their rooms, build theories that give it life. Judges should realize this”. “In all the States that make up Europe, any movement or association can only act or take legal action if it has previously been recognized as +representative+ by an indisputable authority. This is notably the purpose of the notion of public utility in French law. In international law, the only authority that can assess legal capacity at this level is the United Nations. However, in his recent report to the Security Council on the question of the Moroccan Sahara, UN Secretary-General Antonio Guterres confirmed that +the polisario+ does not enjoy any status at the United Nations. End of story…”, he said. “We are talking about serious things: the economic development of an entire region and the lives of an entire population. This is not the place to leave room for dogmatism or the intellectual games of lawyers who construct seductive theories for the use of their students. Behind all this it is a question of knowing if the farmer of Dakhla will be able to export his tomatoes and the fisherman of Laayoune his fish!”, he pointed out. The European Union, he stressed, cannot accept such a situation, noting that “European judges are treading on slippery ground, walking on water lilies, when they question the decisions of the EU Council and thus threaten the economic interests of an entire region and its population. They even risk losing all credit.”