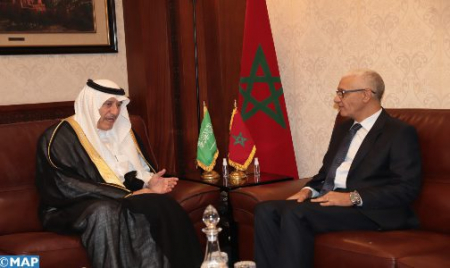 The Saudi ambassador to Morocco, Abdullah bin Saad Al Ghurairi, reiterated, Monday in Rabat, the “unwavering” position of his country in favor of the Moroccanness of the Sahara and the territorial integrity of Morocco. “The security and stability of the Kingdom of Morocco are part of the security and stability of the Kingdom of Saudi Arabia,” Al Ghurairi told reporters following talks with Lower House Speaker Rachid Talbi Alami. On this occasion, the diplomat highlighted the distinguished relations between the two brotherly countries in all areas as well as the continuous coordination and consultation that mark bilateral relations at the legislative, executive and judicial levels. For his part, Talbi Alami commended Saudi Arabia’s clear and unwavering stance regarding the Moroccanness of the Sahara and the sovereignty of the Kingdom over all its territories. Talks were an opportunity to discuss several issues of common interest, as well as the ways to strengthen cooperation between the two countries in various fields, he added.