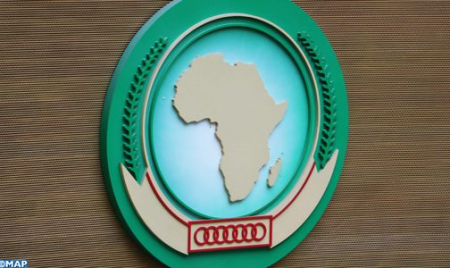 The 2nd African Union-European Union Ministerial Meeting’s preparatory work began on Monday in Rwanda’s Kigali, with the participation of Morocco. Morocco is represented by a delegation composed of the Director of the European Union and Mediterranean Processes, Omar Amghar, the Director of European Affairs, Redouane Adghoughi, the Head of Division of Regional Partnerships at the Directorate of the Greater Maghreb, AMU Affairs and the AU, Mohamed Atlassi and the political adviser to the Permanent Mission of the Kingdom in Addis Ababa, Yassine Gaouane. This preparatory meeting aims to facilitate the deliberations of the Ministers of Foreign Affairs, to review the progress made in the framework of the joint partnership and to prepare the outline of a joint statement to be adopted at the end of the ministerial meeting. Speaking at the opening of the meeting, the Deputy Chairperson of the African Union Commission (AUC) and head of the AUC delegation, Monique Nsanzabaganwa, stressed that the 2nd AU-EU ministerial meeting will bring a new practical dimension to Africa-Europe partnership in the implementation of common priorities. The ministerial meeting, she continued, will be an opportunity to “reaffirm our commitment to promoting effective multilateralism and a rule-based global order,” adding that Africa is ready to make its contribution to charting a more sustainable path to prosperity for all. For her part, the representative of the European Union, Rita Laranjinha, emphasized the prospects for cooperation between Africa and Europe, noting that the two continents share a common responsibility for achieving the goals of the Global Agenda 2030. Meanwhile, the Permanent Secretary of the Rwandan Ministry of Foreign Affairs, Clementine Mukeka, argued that Africa and Europe are called upon today to work hand in hand to address the challenges facing the two continents and find mutually beneficial solutions. According to the organizers, nearly 500 participants, including more than 60 foreign ministers from the AU and the EU, will meet on Tuesday for the 2nd AU-EU ministerial meeting. The meeting will address issues such as security, governance and migration, as well as investment in the continent’s sustainable development, and equitable access to COVID-19 vaccines against Covid-19.