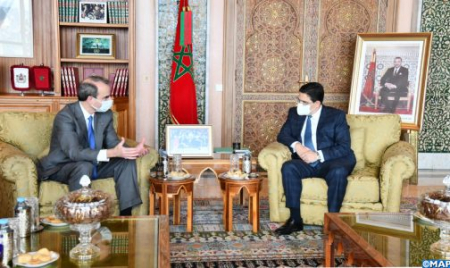 Minister of Foreign Affairs, African Cooperation and Moroccans Abroad, Nasser Bourita, received Wednesday in Rabat a delegation from the American Jewish Committee (AJC). Speaking to reporters at the end of these talks, AJC Chief policy and political affairs officer Jason Isaacson said that this meeting focused on several questions regarding regional stability, peace and the importance of the relationship between the United States and Morocco, “a country that has the longest diplomatic relationship with our country” and “shares the same values as our country.” “We spoke about common concerns of our community and the people of Morocco and the sovereignty of Morocco in the Moroccan Sahara,” he added. Isaacson stressed that “Morocco has just, under his Majesty King Mohammed VI, made history through the re-establishment of relationships with Israel.”