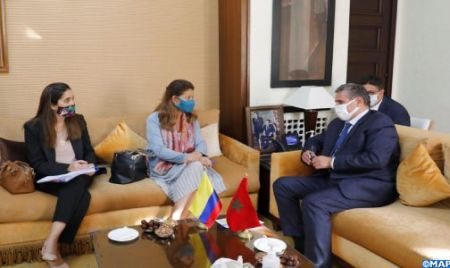 The Head of Government Aziz Akhannouch and the Vice President and Minister of Foreign Affairs of Colombia, Marta Lucía Ramírez, praised, Thursday in Rabat, the distinguished level of friendship relations between the two countries. The two parties welcomed the “distinguished level of friendly relations between the Kingdom of Morocco and the Republic of Colombia, marked by a continuous and constructive political dialogue and a convergence of views on several regional and international issues of common interest, in addition to their determination to consolidate South-South cooperation,” said a statement by the Department of the Head of Government issued after a meeting between the two officials. On this occasion, Akhannouch commended the decision of Colombia to give instructions to its new ambassador in Rabat to extend the consular jurisdiction of the embassy throughout the Moroccan territory, the statement added. The two parties also reviewed the prospects for partnership that allows the strategic positioning of the two countries, which are two gateways to the African continent, the Arab world and Europe, for one, and to Latin America and the Caribbean, for the other, according to the same source. They also reaffirmed their willingness to strengthen the dynamics that mark the bilateral relations at all levels, including the intensification of exchanges of visits between officials, the regularity of bilateral political consultations and coordination at the level of various international forums.