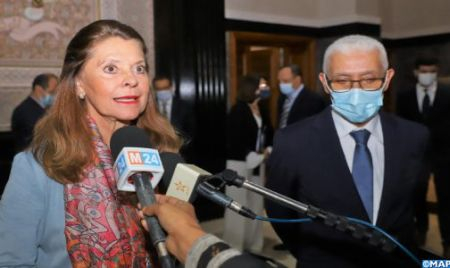 Morocco has become an “emerging economic power” and is, as much for Colombia as for many South American countries, a gateway to African markets, said Thursday in Rabat, the Vice President and Minister of Foreign Relations of the Republic of Colombia, Marta Lucia Ramirez, welcoming the development and prosperity achieved by the Kingdom thanks to the wise leadership of HM King Mohammed VI. Morocco has made significant progress in strengthening democracy, development and the economy, Ramirez noted in a statement to the press after her meeting with the speaker of the House of Representatives, Rachid Talbi Alami, noting that the two countries share the same challenges and orientations on many issues. “We will work to strengthen and improve our ties in the near future,” she stressed. Referring to the impact of the Covid-19 pandemic on both countries, the Colombian official said that these challenges are “an opportunity for economic takeoff” for her country, as well as for Morocco, which has taken an important step in terms of health coverage and mass vaccination, which has allowed it to overcome this stage or crisis, she noted. For his part, Talbi Alami said that this meeting was an opportunity to review ways to strengthen bilateral cooperation and address the issues and challenges facing the two countries. The discussions also focused on the issue of the territorial integrity of the Kingdom and the impact of the pandemic Covid-19, he added, noting that the Colombian official praised the Moroccan experience to contain this virus and welcomed the vaccination operation conducted by the Kingdom, closely followed by South American countries, especially Colombia. Talbi Alami noted, moreover, the determination of both countries to work for the recovery of their economies and to address the economic and social crises resulting from the health crisis.