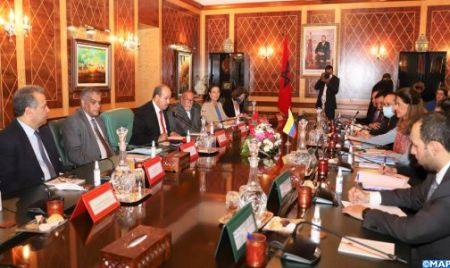 The strengthening of parliamentary cooperation between Morocco and Colombia was the focus of a meeting, Thursday in Rabat, between speaker of the House of Advisors, Naam Miyara and Vice President and Minister of External Relations of the Republic of Colombia, Marta Lucia Ramírez. The meeting was an opportunity to discuss ways to strengthen cooperation between the parliaments of both countries, said Miyara in a statement to the press after the talks, noting that the visit of the Colombian official is a harbinger of the passage to a higher level in relations between Morocco and Colombia. Miyara noted, moreover, that the Colombian official said that her country can be for Morocco a gateway to South America and that the Kingdom can become for Colombia the gateway to Africa. The speaker of the upper House also indicated that the two parties examined during the meeting several issues of common interest, and the question of the territorial integrity of the Kingdom. For her part, Ramirez, on an official visit to Morocco from October 28 to November 1, stressed the importance of relations between the parliaments of the two countries, noting that Colombian parliamentarians maintain strong relations with the Moroccan Parliament. The Colombian official also welcomed the level of agricultural development achieved by Morocco, expressing her hope to “work together to achieve a fruitful cooperation”.