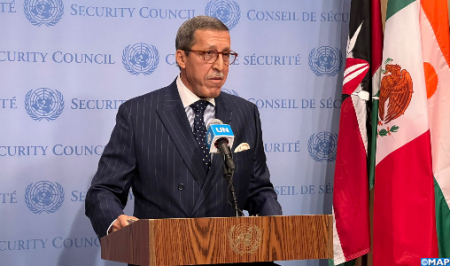 The resolution 2602 of the UN Security Council adopted on Friday, confirms the “continuum” of the roundtable process as the “one and only” framework for the settlement of the regional dispute over the Moroccan Sahara, said in New York, Permanent Representative of Morocco to the UN, Ambassador Omar Hilale. The new resolution, which is in line with the last four resolutions of the Security Council, “reinforces and confirms the continuum of the roundtable process with its modalities and with its four participants – Morocco, Algeria, Mauritania, and polisario – as the only framework for the settlement” of the regional dispute over the Moroccan Sahara, Hilale explained during a press conference at the Security Council following the adoption of the new resolution. In this regard, the Security Council has decided, once again, that the ultimate aim of the political process is to achieve a realistic, pragmatic, sustainable, mutually acceptable political solution that is based on compromise, the ambassador noted. “In this context and by reiterating in its 18th consecutive resolution the seriousness, the credibility of the Moroccan autonomy initiative, the Security Council confirms, if still needed, that autonomy remains and will be the ultimate and final solution to this regional dispute,” Hilale stressed. He added that the adoption of this new resolution comes in a context “full of optimism” for the resumption of the political process, following the appointment of Staffan de Mistura as the new personal envoy of the UN Secretary-General for the Moroccan Sahara. The Moroccan diplomat extended his “warm congratulations” to the new personal envoy of the UN SG and pledged Morocco’s full support and cooperation for the success of his facilitation. In addition, the Ambassador said that the Security Council has exposed, in its new resolution, the “allegations, and lies” peddled by Algeria and polisario about a so-called “Hollywood” war in the Moroccan Sahara, “and this is ignoring their war narrative attesting to the calm, quiet and normality of life in our southern provinces.” The UN executive body confirmed the “irreversibility” of the peaceful action carried out by Morocco in the region of Guerguerat last November, which allowed “to definitively and once and for all drive out the armed militias of the polisario,” Hilale pointed out. He added that the Security Council expressed its “deep concern” about the breaking of the ceasefire by the armed separatist group, the polisario, as well as its obstructions to the freedom of movement of MINURSO “dangerously compromising” its mandate of supervision of the ceasefire on the ground. Morocco declared through the Highest Authority of the Kingdom to the UN SG its commitment to the respect and maintenance of the cease-fire, as well as its cooperation with Minurso, he added. The Ambassador also stated that Morocco welcomes the appointment of Alexander Ivanko as special representative and head of Minurso, reiterating the “assurances” of cooperation of the Kingdom. Hilale noted that the Security Council welcomed, once again, the achievements and efforts of the Kingdom in the promotion and protection of human rights in its Saharan provinces, “thus inflicting a stinging disavowal on Algeria and its polisario” which is struggling with millions of dollars to misrepresent and misinform about the enjoyment by the populations of the Moroccan Sahara of their full rights. The Moroccan diplomat also thanked the United States for the presentation and negotiation of this resolution as well as the members of the Security Council for their support.