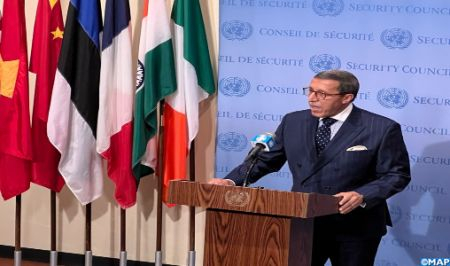 Algeria “has committed one of the most serious violations” of human rights by putting the populations of the Tindouf camps in the hands of an armed separatist group, said, in New York, Permanent Representative of Morocco to the UN, ambassador Omar Hilale. Speaking at a press conference held following the adoption by the Security Council of Resolution 2602 extending the mandate of MINURSO for one year, Hilale noted that Algeria has ceded part of its territory to the separatist group the polisario, noting that the Tindouf camps are the only ones in the world that are not civilian. Pointing out that “systematic” violations of human rights and discrimination in the Tindouf camps have been denounced by international bodies, non-governmental organizations, as well as human rights mandate holders, the diplomat recalled, citing the latest report of the UN Secretary General, that Algerian military killed two Sahrawis in these camps in October 2020. “Algeria does not allow anyone to enter these camps and does not allow human rights mandate holders to see what is happening there,” he said. These “violations exist because Algeria refuses to carry out the census and registration of the populations” of the Tindouf camps, noted Hilale. He explained that in accordance with the Geneva Convention on Refugees of 1951, the fundamental objective of any census is to protect the rights of these populations, identify their needs and meet their expectations. He insisted that the international responsibility of a country is imprescriptible, adding that Algeria will remain responsible for the violations that occur in the camps and will be held accountable one day. So many responsibilities that Algeria must assume before history, the peoples of the Maghreb and the United Nations, concluded the ambassador of Morocco.