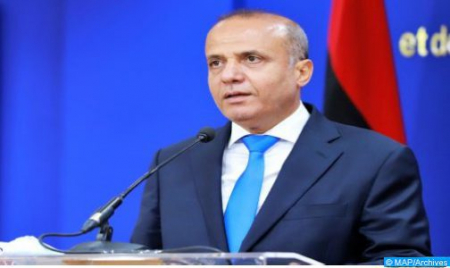 The deputy president of the Libyan Presidential Council, Abdullah Allafi, has commended the “major role” played by HM King Mohammed VI in the settlement of the Libyan conflict. “The efforts of His Majesty King Mohammed VI and His support for the consensus project between all Libyan parties since 2014 have led to the signing of the Skhirat agreement and the formation of a presidential council”, Allafi pointed out in an interview with MAP on the sidelines of a visit to Tunisia. He also stressed the “positive role” that Morocco has been playing for years to find a way out of the Libyan crisis. “Morocco has greatly contributed to bringing together the points of view of the Libyan parties, in particular through the first dialogue forum in Skhirat (2015),” he recalled. “The role played by Morocco helped to bring together the House of Representatives and members present in Tangier on the same table, which had a positive impact” on the dialogue process, said the deputy president of the presidential council, adding that the meeting was the prelude to the reconciliation process between members of the House of Representatives. He recalled that his visit to Morocco about a month ago was an opportunity to discuss with the Minister of Foreign Affairs, African Cooperation and Moroccans Abroad, Nasser Bourita, the developments of the situation in Libya, deeming this trip as “very positive”. Allafi underlined the position of Morocco which had called for the holding of Libyan elections on December 24 and respect for the road map and the will of the Libyan people. Regarding the reconciliation process, the deputy president of the Libyan Presidential Council reported remarkable progress made, which the country can build on to restore peace, stability and prosperity. He said three processes have been launched to unify the country politically, economically and militarily. At the political level, the executive branch has become one power in one government instead of two governments in the past, one in the East and the other in the West, and most of the institutions have been brought together, he said. The official said a single budget has been put in place for the whole country through the Ministry of Finance and the Central Bank of Tripoli. On the military side, huge efforts have been made by the Presidential Council with the aim of unifying the military institution, he pointed out.