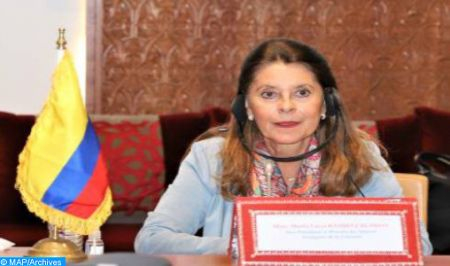 The consular services provided by the Colombian embassy in Rabat will cover the entire Moroccan territory, including the Sahara, reaffirmed Vice President and Minister of Foreign Affairs of the Republic of Colombia, Marta Lucia Ramirez. “I reiterate that the consular services provided by the Colombian embassy in Morocco will be carried out in coordination with the Moroccan authorities and will cover the entire Moroccan territory, including the Sahara,” said Lucia Ramirez in an interview with MAP, on the sidelines of her visit to Morocco. The Colombian official, who has completed an official visit to the Kingdom, said that this “extension of consular assistance has no impact on diplomatic or consular relations of Morocco and Colombia with third countries,” adding that consular assistance in the Sahara will facilitate services to Colombians. “As Colombia’s Minister of Foreign Affairs, my responsibility is to ensure that every Colombian abroad knows that they can go to the nearest Colombian embassy or consulate in case of need,” she said. Lucia Ramirez added that following her visit to Morocco, which reflects the excellent level of relations between Colombia and the Kingdom, the agreement on mutual exemption of visas will enter into force, from November 28, for short stay travel for holders of ordinary passports. “We are sure that this agreement will exponentially increase the flow of travel between the two countries, both for tourism and for investment and bilateral trade,” she stressed, noting that this flow of travelers will include those who travel to North Africa, as well as those in the Sahara.” “All of the above will serve the economic recovery, investment, tourism and employment in our two countries,” she said. On the Sahara issue, Lucia Ramirez reaffirmed the position of her country recognizing the importance of the Moroccan autonomy initiative, all the efforts of the UN Secretary General, the appointment of his new Personal Envoy Staffan de Mistura and the relevant resolutions of the Security Council to achieve a realistic and lasting political solution, based on the compromise of all parties, to put an end to an issue that Morocco considers vital in the context of its territorial integrity. With these statements, Vice-President of Colombia confirms loud and clear the content of the joint statement of October 28, 2021, issued after her meeting with Minister of Foreign Affairs, African Cooperation and Moroccans Abroad, Nasser Bourita, and especially paragraphs 8 and 9 of this document, which include the recognition of the importance of the autonomy plan and the decision to extend the consular services of Colombia in the Moroccan Sahara.