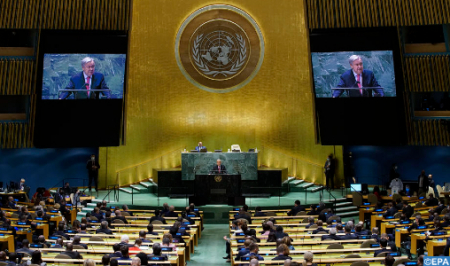 Equatorial Guinea welcomed, in New York, the efforts made by Morocco to achieve a “just, consensual and mutually acceptable” solution to the regional dispute over the Sahara. The autonomy initiative, the new development model of the southern provinces and the efforts made as part of the fight against the Covid-19 pandemic through wide access to vaccines for local populations “attest to Morocco’s commitment” in favor of a solution capable of ensuring peace, stability and security in the region, underlined the permanent representative of Equatorial Guinea to the UN, Anatolio Ndong Mba, before the 4th Committee of the General Assembly of the United Nations. He also expressed his country’s support for the political process carried out under the “exclusive” auspices of the Secretary-General of the United Nations, aimed at reaching a “realistic, viable and lasting political solution, based on commitment.” The Equatorial Guinean diplomat also expressed his country’s “full satisfaction” with the roundtable process with the participation of Algeria, Morocco, Mauritania and the Polisario. He also welcomed the appointment of Mr. Staffan De Mistura as the new personal envoy of the UN Secretary General for the Moroccan Sahara.