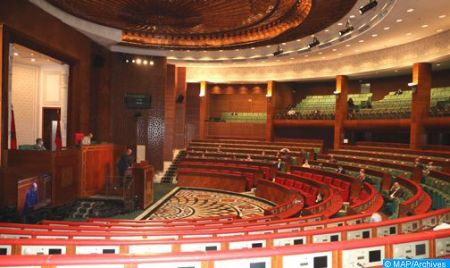 The bureau of the House of Advisors reiterated the constant mobilization of the upper house for the defense of the supreme interests of the Kingdom in the framework of an effective parliamentary diplomacy and in accordance with the Royal Directions. In a statement by the bureau of the House of Advisors issued at the end of the meeting held Monday under the chairmanship of Naam Miyara, speaker of the House, and devoted to the deliberation of the agenda for the current week, the members of the bureau highlighted the content of the recent resolution of the UN Security Council, extending the mandate of MINURSO for one year. The upper house speaker and the members of the bureau stressed the importance of this resolution which consolidates the achievements of the Kingdom, notably the securing of the Guerguerat passage and its reopening to commercial traffic, as well as the U.S. recognition of the Moroccanness of the Sahara as well as the opening of several consular offices in the southern provinces of the Kingdom. This resolution, added the statement, provides answers to all the maneuvers of the enemies of the territorial unity of the Kingdom and reaffirms the realistic nature of the autonomy proposal presented by Morocco since 2007. On this occasion, the speaker of the House of Advisors and the members of the bureau expressed their great pride in the achievements of the Kingdom in this area thanks to the personal mobilization and constant monitoring of HM King Mohammed VI, the same source noted. In the same vein, Miyara and the members of the bureau deliberated on the elements of the plan of diplomatic action of the upper house for the period 2021-2024, in order to improve its diplomatic performance in the service of the supreme interests of the country, in harmony with the efforts deployed by the Royal diplomacy under the farsighted leadership of HM King Mohammed VI. The bureau of the upper house also decided to take part in the proceedings of the 143rd Assembly of the Inter-Parliamentary Union (IPU) to be held in Madrid, on November 26-30, 2021.