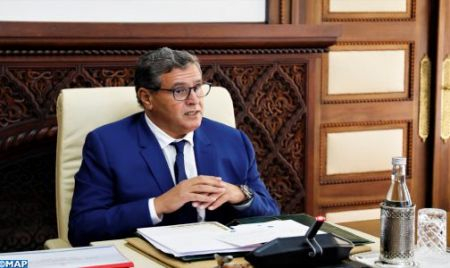 The Head of Government, Aziz Akhannouch, said Thursday at a Council of Government meeting held by video conference, that the national vaccination campaign against Covid-19 “is running with success”, thanks to the growing adherence of citizens. The Minister Delegate for Relations with Parliament, Government Spokesman, Mustapha Baitas, said at a press briefing after the meeting, Akhannouch had stressed that in Morocco, and like many countries in the world, “the majority of citizens have reacted positively to the vaccination campaign and have adhered to it”. “The citizens claim their right to resume their normal life and conduct their activities normally,” Akhannouch had said, adding that “these are indeed the expectations that the government wants to meet”. He had assured that Morocco has managed, thanks to the personal commitment of His Majesty King Mohammed VI, to procure sufficient quantities of vaccines for all citizens, and continues its momentum to achieve immunity against the virus. “Vaccination, as agreed by experts around the world, is the only effective way to fight the pandemic,” he stressed.