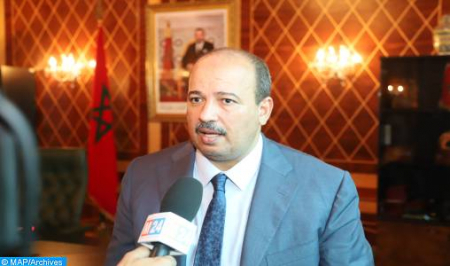 The Speaker of the House of Advisors (upper house), Naam Miyara, highlighted, Thursday in Rabat, the importance of promoting trade and economic relations between the Kingdom and Vietnam and raising them to the distinguished level of political ties binding the two countries. During talks with the Ambassador of the Socialist Republic of Vietnam to Morocco, Ms. Dang Thi Thu Ha, Mr. Miyara called for the use of all the opportunities and potentialities offered by the the two countries, given their respective strategic locations, in order to consolidate economic relations and encourage the exchange of visits between businessmen from both sides. On the same occasion, the Speaker praised the good friendly relations between the two countries, based on human and historical ties, on the values of understanding and mutual respect as well as on cooperation, coordination and consultation at regional and international fora. He also underlined the importance of joint parliamentary action at bilateral and multilateral levels in order to raise relations between the legislative institutions of the two countries to a higher level, in the service of the common interests of the two countries and to strengthen cooperation between the upper house and regional parliamentary groupings in Asia. Regarding the territorial integrity of the Kingdom, Mr. Miyara praised the position of Vietnam which has frozen its recognition of the ghostly republic and which supports the efforts of the United Nations for the search for a political settlement to the artificial dispute over the Moroccan Sahara, stressing in this regard the relevance, the seriousness and the credibility of the Moroccan autonomy plan. For her part, Ms. Dang Thi Tho expressed her readiness to seize the opportunities offered by both sides in order to deepen and develop bilateral relations at the economic, social and development levels, within the framework of partnership and cooperation mechanisms between the two countries, expressing her esteem for the fundamental reforms undertaken by Morocco in all areas. The geostrategic location of the two countries constitutes a favorable factor for consolidating and strengthening bilateral relations at different levels, she pointed out, adding that “Vietnam will benefit from Morocco’s special position in Africa to develop its relations with the States of this continent and it is the same for Morocco which will benefit from the location of Vietnam to strengthen its relations with the countries in South-East Asia “. This meeting offered the opportunity to highlight the solid relations of friendship uniting the two countries and peoples and to review the historic stages that have strengthened Moroccan-Vietnamese ties. The two sides also welcomed the level of bilateral cooperation in political and diplomatic fields and the mutual support for their respective positions during international fora, focusing in this regard on the commemoration of the 60th anniversary of the establishment of diplomatic relations between the two countries.