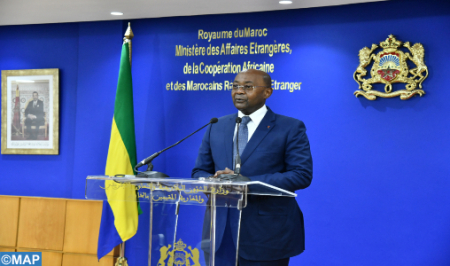 Gabon plans to organize several events in the city of Laayoune to strengthen its presence in this part of the territory of the Kingdom of Morocco, the Gabonese Foreign Minister, Pacôme Moubelet Boubeya, announced Friday in Rabat. Through the organization of these events, the Gabonese Republic reaffirms its support for the Moroccanness of the Sahara, underlined the Gabonese top diplomat at a press briefing following talks with the Moroccan minister of Foreign Affairs, African Cooperation and Moroccans Abroad, Nasser Bourita. He also thanked the Kingdom for its support to Gabon in the organization of a cultural day in Laâyoune, noting that this event was a great success. Mr. Boubeya also reiterated his country’s continued support for the issue of the Kingdom’s territorial integrity. The Gabonese embassy in Rabat chose the city of Laayoune last September to celebrate the 61st anniversary of the independence of this friendly African country, which in January 2020 opened a consulate general in the capital of the Moroccan Sahara. A rich program has been set out for this celebration organized under the sign “Gabon in Laayoune”, including artistic performances reflecting the rich Gabonese cultural heritage, an exhibition of Gabonese products, donations of school kits and visits to several projects in Laayoune.