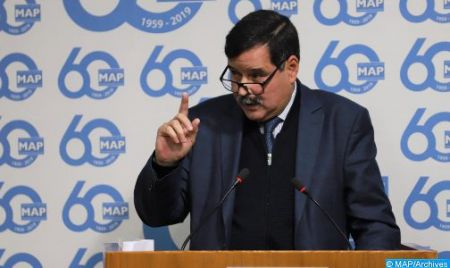 The royal speech addressed Saturday to the nation on the occasion of the 46th anniversary of the memorable Green March “is truly the speech of a historical leader advocating a strategy of national recovery, with clear objectives, and concerned to capitalize on the achievements in all confidence and realism,” said writer-journalist Talaâ Saoud Al Atlassi. The royal speech delivered on this occasion, the Green March that allowed Morocco to regain its unity and liberate the southern provinces from the yoke of Spanish colonization, is rich in lessons and edifying messages,” he said in an article published in the columns of the Arabic-language daily ”Al Atihad Al Ichtiraki” in its Monday edition. “This historical leader, leading his people in their mobilization to face the challenges posed on the national and development levels, does not care about turbulence and other provocations coming from those who languish in the margins of history. A speech that elevates politics to a high level in its noblest and deepest sense,” read the article with the evocative title “Nobility of Moroccan patriotism and its intransigence”. The author added that “the sovereign who leads this triumphant national will, the will of all Moroccans including our compatriots in the southern provinces, is truly a will that deserves all this international recognition. The royal speech which rightly emanates from this national will, expresses in an edifying way all the nobility of the Moroccan patriotism and its intransigence”. Talaâ Saoud Al Atlassi also emphasized that the royal speech that surprised more than one among opponents, is a hymn to the future. Because the Sovereign thinks only of the future of his people and that of Morocco, adding that in this concern for the future, the royal speech suggests new ways in its relations with the international community, a new approach focused primarily and exclusively on the Moroccan Sahara. And as a result, he added, the national cause is now fundamental and nodal in the Kingdom’s relations with the international community and in its partnerships. For him, “the centrality of the issue of the Moroccan Sahara in the political and socio-economic edifice of Morocco and in view of the successes recorded, is now essential in the new generation of economic partnerships of Morocco. Especially since the royal speech could not be clearer and also uncompromising on the issue in addressing the partners. From now on, as analysts have understood, a new chapter is opening, heralding a new approach in relations with Morocco”.  “All these geo-strategic innovations resulting from Morocco’s success in its fierce defense of its territorial integrity, can in no way remain a dead letter in the Kingdom’s foreign relations,” he said, adding that ”the American recognition of the Moroccan Sahara is not an act of diplomatic complacency, nor the result of a mood swing of the former U.S. president, Donald Trump, but the result of a fair and long-term assessment by the United States of the strength of Morocco and its strategic positioning on the African and Arab plans”. He also noted that “all the potentialities of the Kingdom are nourished by its patriotism which has not only consolidated the unity of its territory and its people, but also promoted the emergence of a citizen consciousness concerned with progress and stability. These are the factors behind Morocco’s diplomatic successes at the United Nations and even in the heart of the Moroccan Sahara with the numerous inaugurations of consulates. And it would be fitting that countries that consider themselves friends of the Kingdom should be the first to celebrate this new Morocco and to respond to its expectations”. He called on partner countries to break with hypocritical speeches and ambivalence in their positions displayed because “Morocco can no longer admit that we treat it with condescension”. The author assured that Morocco, strong of its people and its enormous potential, has today all the assets ensuring its power and does not care about diplomatic compliments. “The royal speech is a speech of strength and intransigence, placing the first national cause on a pedestal that protects it from one-upmanship and other idle polemics. A speech that goes to the bottom of things and gives, so to speak, the kick-off of a new national march, a march that draws its legitimacy from international resolutions and in favor of which all the Moroccan people in all regions of the Kingdom are mobilized and ready to defend it. A patriotism that will certainly give a new dynamic to the New Development Model (NDM) being materialized. In conclusion, Talaâ Saoud Al Atlassi noted that “the royal speech is addressed to a people proud of their achievements and confident in the future of Morocco. A speech that is also addressed to world leaders telling them that the Kingdom, strong of its potential, is determined to defend its dignity and its rights while committing to make its contribution on the path of promoting prosperity and peace in the African continent and in the world”.