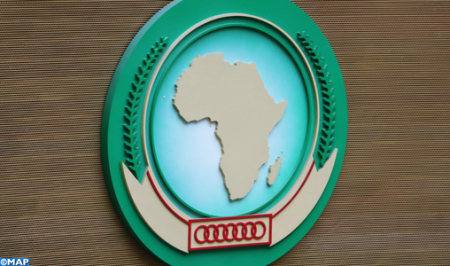 The Central African newspaper “Centrafric Matin” has underlined that the presence of the so-called “Sadr” in the African Union (AU) is “a serious violation of international law and of the Charter of the organization”, referring, in this regard, to the statements of the participants in a regional seminar held recently in Dar-Es Salaam, Tanzania. The participants in this seminar unanimously called for the immediate expulsion of the so-called “sadr”, “a puppet entity, whose presence within the African Union, in addition to constituting a serious violation of international law and of the Charter of the Pan-African Organization, is a source of division and instability in Africa”, the paper stressed in an article published under the title “the expulsion of the + sadr + from the African Union is an imperative and an absolute necessity : flagrant violation of the AU Charter”. “The regional dispute over the Moroccan Sahara is undoubtedly a + major brake + to the economic integration of Africa and an obstacle to peace and stability on the Continent”, said the participants in this seminar organized under the theme “The Imperative of Post-Covid Recovery: How Can the Resolution of the Sahara Issue Spur African Stability and Integration?”, noted the Central African newspaper. The participants in this seminar underlined the urgency of achieving a realistic and final solution to this artificial dispute, based on the Moroccan autonomy initiative, warning against the separatist groups of the so-called “Sadr” for the division they sow and the “alarming threat” they pose to the implementation of the African Continental Free Trade Area (AfCFTA). The debates held in the framework of this meeting, co-organized by the Institute of Peace and Conflict Studies (IPCS) and the Tanzania Peace Foundation (TPF), highlighted the need to expel the so-called “Sadr” from the AU and all its bodies, to allow the pan-African institution to be at the forefront, and to play a truly constitutive role in order to achieve the objectives of Agenda 2063 and to contribute positively to the efforts of the United Nations for the final resolution of the regional dispute over the Moroccan Sahara, the newspaper said. It is also in this regard, according to the same source, that the participants highlighted the implementation of the New Development Model in the southern provinces as well as the various large-scale projects launched by His Majesty King Mohammed VI in this region, which cover key sectors, such as infrastructure, renewable energies, logistics and higher education. These projects, said the newspaper, make the Moroccan Sahara both a bridge between sub-Saharan Africa and Europe, and a socio-economic development pole for the local populations and the African continent. In addition, the opening of Consulates General in Dakhla and Laayoune underline the recognition of Morocco’s absolute sovereignty over its Sahara, thus reflecting and illustrating the alignment of Africans with the Moroccan position and their determination to put an end, once for all, to this artificial dispute which hinders the takeoff of the Continent, the paper added.