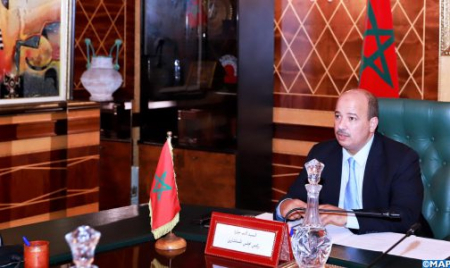 The House of Advisors (upper house) has reiterated its mobilization to ensure the defense of national and territorial unity and consolidate the achievements made in the southern provinces of the Kingdom, the House said Monday in a statement issued following a meeting chaired by Spaker Naam Mayara. During this meeting, dedicated to the deliberation of the agenda of the House for the current week, the Speaker and the members of the Bureau reviewed the content of the Royal speech delivered by His Majesty King Mohammed VI, last Saturday, on the occasion of the 46th anniversary of the glorious Green March, during which the Sovereign reiterated the Kingdom’s commitment to the search for a peaceful solution, to the maintenance of the ceasefire and to the pursuit of coordination and cooperation with MINURSO, within the remit of its specified mandate, as well as Morocco’s attachment to the autonomy initiative within the framework of Moroccan sovereignty, as the only solution in the path of the UN-led political process to end the artificial regional conflict over the Moroccan Sahara. On this occasion, the House Speaker as well as the members of the Bureau reiterated “all their pride in the achievements made by Morocco in this regard, including security and the restoration of the free movement of people and goods at the Guerguerat crossing as well as the US recognition of the Moroccanness of the Sahara and the opening of more than 24 consulates of brotherly and friendly countries in the cities of Laayoune and Dakhla”, the statement reads. In the same regard, the House Speaker and the members of the Bureau expressed “their deep gratitude and appreciation to all the components of the Royal Armed Forces, the Royal Gendarmerie, the National Security Forces, the Auxiliary Forces, the local government authorities and the Emergency Services, for their permanent mobilization, under the leadership of His Majesty King Mohammed VI, to defend the unity of the homeland and preserve its security and stability”, the source adds. The Bureau of the Upper House has taken the decision to enable all the components of the House to express themselves, on an exceptional basis, during the oral questions session, which will take place on Tuesday, November 9, 2021, as part of the interaction with the Royal speech. The Bureau has also decided to host a seminar on Tuesday 9 November 2021 at 5.30 p.m., to present the book by Spanish writer “José María Lizundia” entitled “The desert: the decline of totalitarianism”, in the presence of the High commissioner for former resistants and former members of the liberation army.