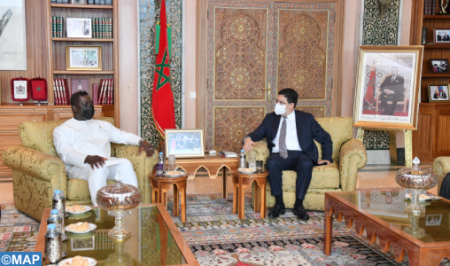 The minister of Foreign Affairs, African Cooperation and Moroccans Abroad, Nasser Bourita, on Thursday held talks in Rabat with his Sierra Leonean counterpart, David Francis, which focused on several bilateral and regional issues. Speaking at a joint press briefing, Bourita described as “very positive” these talks, which confirm the remarkable dynamic experienced by relations between the two countries, under the leadership of HM King Mohammed VI and President Julius Maada Bio. Bilateral relations have seen a significant evolution, added the minister, recalling the last visit to Morocco of his Sierra Leonean counterpart, during which they had agreed to hold the High Joint Commission during the first quarter of 2022 in Freetown, in addition to a Business Forum, with the aim of boosting cooperation between the two countries. He also recalled the signing, during the same visit, of a bilateral cooperation roadmap for the next two years, adding that the two countries have started to implement this roadmap in the areas of training, sectoral collaboration and coordinating positions on several issues. Bourita underlined that the Sierra Leonean Consulate in Dakhla has already started its work with the appointment of a Consul General, which is an “illustration” of Sierra Leone’s unwavering position in support of the territorial integrity of Morocco and its sovereignty over its southern provinces. “We have mentioned several other issues, in particular the region of the Mano River, to which HM the King has attached a particular interest for many years in view of the special relations that Morocco maintains with the countries forming the Union of the River Mano and given the role that the Sovereign had played previously in easing tensions between its States,” he added. Sierra Leone’s role in the coming period was also discussed, with Freetown vying for a non-permanent member seat at the UN Security Council from the year 2023. “Morocco and Sierra Leone are cooperating and coordinating within the framework of this candidacy which comes at an important moment because it gives proof that Sierra Leone has regained its stability and has become a regional actor (..) Sierra Leone can thereby speak out for the West African region and all of Africa in connection with issues of peace and security”, Bourita added. For his part, Francis was delighted with a “very broad” discussion which made it possible to examine ways of strengthening the “particular and special” relations binding Morocco and Sierra Leone. Referring to the role of Morocco in relation to the Union of the Mano River, the Sierra Leonean minister affirmed that the Kingdom continues to support this grouping, stressing that Morocco and HM the King personally play a “very important” role in the functioning of this bloc. “HM the King has played a leading and pivotal role to promote integration in this region,” said Mr. Francis. In addition, the Sierra Leonean minister said he was “happy” with the quality of relations with Morocco, welcoming the opening of a consulate of his country in Dakhla, with the view “of supporting the common interests of the two countries in this region”. He also praised Morocco’s support to Sierra Leone in capacity building through, among other actions, the granting of scholarships to Sierra Leonean students. The minister underlined the need of the operationalization of the joint commission, as it constitutes an important mechanism for identifying the key elements of strengthening cooperation between Rabat and Freetown. The Sierra Leonean top diplomat also welcomed the support of Morocco, a “global player”, for his country’s candidacy to join the executive body of the UN. On August 26 in Rabat, Morocco and Sierra Leone signed a roadmap aimed at strengthening bilateral cooperation in several areas. The document relates to the sectors of education and training, technical cooperation, economic promotion and investments, in addition to cooperation in the field of security. It also covers the exchange of official visits.