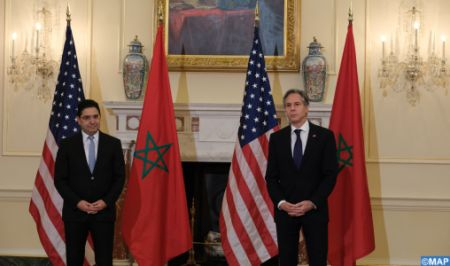 Minister of Foreign Affairs, African Cooperation and Moroccans Abroad, Nasser Bourita, made, from 18 to 23 November, a working visit to Washington, the first under the new administration of U.S. President, Joe Biden, to consolidate the strategic partnership between Morocco and the United States and consult on various regional issues. During this visit, Bourita had intense diplomatic activity with meetings with the U.S. Secretary of State, Antony Blinken, officials at the White House and the State Department, Senators and Congressmen, as well as representatives of some of the influential think tanks in the U.S. capital. These meetings took place in the presence of Morocco’s ambassador to Washington, Lalla Joumala Alaoui. The head of U.S. diplomacy welcomed, on this occasion, the “solid and long-standing” cooperation between the United States and Morocco, while reaffirming the willingness of his country to further consolidate this partnership “rooted in common interests for regional peace, security and prosperity”. “We have a long-standing partnership with Morocco, which we want to strengthen and deepen,” he said. In a statement released after the meeting, State Department spokesman Ned Price said Bourita and Blinken also “discussed the newly formed Moroccan government’s efforts to advance HM the King’s reform agenda” in various areas. In addition to discussions with his counterpart, the Minister also met at the State Department with the U.S. Undersecretary of State for the Middle East, Yael Lempert and with the Assistant Secretary for the Middle East Peace Process, Hadi Amr. At the White House, Bourita met with National Security Council (NSC) MENA Coordinator Brett McGurk and the Council’s senior official, ambassador Barbara Leaf. In Congress, the Minister also had a series of meetings with Senators and Congressmen, both Democrats and Republicans. Several officials of major think tanks in Washington had the opportunity to exchange with the Minister on the latest developments in Moroccan-US relations and the situation in the region. During these discussions in Washington, the focus was placed on the bilateral strategic partnership in various areas, regional issues, especially in North Africa and the Middle East and the importance of preserving regional stability. This visit was an opportunity to reiterate the importance of the strategic bilateral partnership between Morocco and the United States, and reaffirm the joint commitment of the two countries to renew and strengthen this partnership, in particular through the holding of an upcoming session of the Strategic Dialogue, as well as the launch of joint projects in various areas, including strategic investment in renewable energy and technology. On the occasion of the visit of Bourita, the United States reaffirmed, again, its support for the Moroccan autonomy initiative as a serious, credible and realistic solution to definitively end the regional dispute over the Sahara. Both countries expressed their support to the new Personal Envoy of the UN Secretary General, Staffan De Mistura, in the conduct of the political process on the issue of the Moroccan Sahara, carried out under the auspices of the United Nations. The visit also served as an opportunity to reaffirm the Joint Declaration between Morocco, Israel and the United States, signed on December 22, 2020, whose first anniversary is scheduled to be commemorated in a few weeks, and to exchange on ways and means to move forward in the implementation of this Declaration and to strengthen the tripartite cooperation between the three countries in various fields. This Declaration sealed the American recognition of the Kingdom’s full sovereignty over the Sahara.