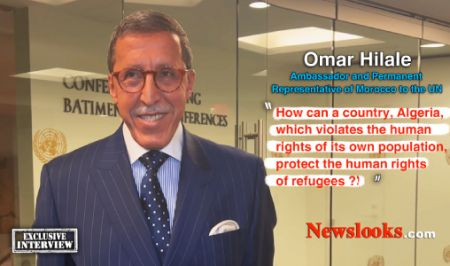 Ambassador Omar Hilale, Morocco’s Permanent Representative to the UN, stressed in an interview with the US magazine “Newslooks” that the “far-reaching” reforms launched by HM King Mohammed VI allowed for “noteworthy” achievements throughout the country, including in the Moroccan Sahara. “Over the past two decades, His Majesty King Mohamed VI’s far-reaching reforms allowed for noteworthy achievements aimed at promoting and protecting the rights of every person, on all Morocco’s territory, without any distinction of any kind,” Hilale said in the interview conducted by prominent American journalist Rachel Alexander. The ambassador noted that today, more than any country in the region, Morocco has put in place the legal and institutional guarantees for a full, effective and irreversible respect for human rights. He also said that human rights are “the backbone” of the Moroccan Constitution, which affirms the Kingdom’s attachment to human rights as they are universally recognized, adding that under the Constitution, international conventions duly ratified by the Kingdom prevail over internal law. “This is fundamental knowing that Morocco has acceded to all international human rights instruments,” Hilale said. The ambassador explained that the situation of full enjoyment of human rights in the Moroccan Sahara “is not different” from other regions of the country, as evidenced by the elections of September 8, which also took place in the Moroccan Sahara, in a climate of serenity and calm and in accordance with international democratic standards. A reality confirmed by foreign and domestic observers, he stressed. The high level of participation of the populations of the Moroccan Sahara in these elections -reaching 63%, the highest at national level- is a testament to their attachment to their morocanness and their desire to contribute to the socio-economic development of Morocco and of their region, through the implementation of the New Development Model of the southern provinces, launched by His Majesty King Mohamed VI in 2015, with a budget of more than 8 billion dollars, Hilale underlined. He recalled that in 1975, when Morocco recovered its Southern Provinces, they were a “complete” desert, noting that “now, thanks to the achievements by Morocco, the Sahara region, with its huge infrastructure, recognized by the United Nations Secretary General, including ports, airports, Olympic sport facilities, universities, roads, to name a few, is one of the most advanced regions not only in Morocco, but in the whole region”. At the international level, Morocco is engaged in a “constructive, voluntary and sustained interaction” with the UN human rights system, in all its components, said the diplomat, adding that Morocco has received more than 13 visits, including to the Sahara, of UN human rights mandate holders in the past few years. “This is by far the highest number of visits to any country in the region,” he said, stressing that the kingdom has also extended an open invitation to all UN mechanisms. In addition, the ambassador exposed the maneuvers of the separatist group “polisario” which constantly resorts to unfounded allegations and fake news to try to mislead the international community about the human rights situation in the Moroccan Sahara. In this regard, he stressed that the UN Security Council resolutions, including 2602 adopted on 29 October 2021, are the “best” answer to these lies, noting that in these resolutions, the executive body of the United Nations welcomes the interaction of Morocco with the Special procedures of the UN Human Rights Council, as well as the role of the Regional Commissions of the National Human Rights Council in Dakhla and Laâyoune. They also praise the steps and initiatives taken by Morocco aimed at enhancing the promotion and protection of human rights in the Moroccan Sahara, Hilale said, adding that Morocco is a country “firmly” attached to the promotion and protection of human rights throughout its national territory, including in its southern provinces.