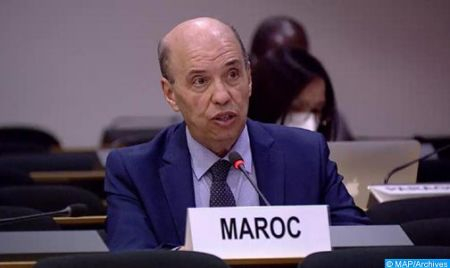 The Moroccan ambassador in Geneva, Omar Zniber, expressed his protest and indignation at the excesses of Mary Lawlor, Special Rapporteur on the situation of human rights defenders, “who without any reservation, launched gratuitous and unfounded accusations about the statement made by the Permanent Representation of the Kingdom in New York, on the duplicity and involvement of a separatist, known for her role plays, staging, and abject victimization”. “This separatist, instrumentalized, in full view of everyone, for many years by the militias of the polisario and the means of propaganda of the Algerian regime, has found, on several occasions, refuge in the writings of Ms. Lawlor, contrary to all the damning and objective evidence concerning her behavior that have nothing to do, either closely or remotely, with those of a so-called defender of human rights,” wrote Zinber in a statement in response to the remarks of the Rapporteur. In this regard, he recalled that in a letter to the Security Council, supported by factual evidence, including proven photos, on which the separatist appears in military dress, and carrying weapons of war, the Permanent Representation of Morocco in New York, revealed that this separatist is a manipulator, in the pay of opponents of the territorial integrity of Morocco, and can in no way be considered a defender of human rights. Zniber said that she had vigorously condemned, in a letter dated July 2, 2021, the statement issued at the time, by the Special Rapporteur, Mary Lawlor, taking cause and effect for separatists having been convicted by the competent courts, in the presence of dozens of observers, jurists and international lawyers, after having murdered 11 members of the Moroccan forces of order, in a cowardly, savage and inhumane manner. This letter, added the ambassador, “had questioned the real will of the Special Rapporteur, which, obviously, does not fit into the logic of interaction and dialogue, advocated by the Kingdom of Morocco”. He recalled that the international authorities, as well as the entire international community, have always noted the climate of total freedom and full enjoyment of the rights of the population of the southern provinces as in the rest of the Kingdom. The recent general elections of September 08, 2021, are a striking proof, in view of the massive participation of the population of these regions, as in previous elections, including in the own family of the separatist in question, some of whom are also elected and represent with dignity and pride, the population in the elective bodies of their respective communes, he stressed. Morocco categorically rejects the terms used, with extreme lightness, by the Special Rapporteur, calling the statements of the Permanent Representation in New York “threats”, said Zniber, blaming the said rapporteur “a clear and outrageous overstepping of the framework of her mandate, which deviates from the neutrality that should be shown by a mandate holder in his/her consideration of any issue relating to human rights.”