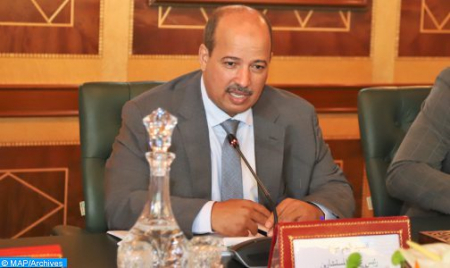 Separatist entities and uncontrolled territorial areas constitute a source of threat and a hotbed of extremism, underlined, Sunday in Madrid, the Speaker of the House of Advisors, Enaam Mayara, who also chairs the Association of Senates, Shoura and Equivalent Councils of Africa and the Arab World (ASSECAA). “Dealing with populist discourses based on hatred and conflict and attacking their roots requires the existence of strong states, because separatist entities and uncontrolled territorial areas remain a source of threat and hotbeds of extremism,” Mayara told the 143rd Assembly of the Inter-Parliamentary Union (IPU), which is being held from 26 to 30 November in Madrid. He explained, in this regard, that the alliance of populist currents with separatist tendencies is the greatest danger that seeks to undermine stability and weaken states and institutional structures, noting that “the world is called today to work to strengthen democracies, emerging economies and countries considered to be pillars of regional and international stability”. The fight against the dangers threatening democracy hinges on greater and closer cooperation, Mayara pointed out. “Populism undermines the processes of democratic building, limits the capacity of democratically elected institutions and threatens their fundamental principles as well as security and peace at the national and international levels”, noted the upper house speaker. “As parliamentarians and legislative parliamentary institutions which derive their legitimacy from the free and spontaneous popular will (…) we have a responsibility to examine deeply the real and objective causes which fuel populist discourse, and to listen to the aspirations of our peoples, in order to find solutions and initiatives that can repair the imbalances of the modern democratic model,” he said. The Speaker of the House of Advisors expressed his conviction that the real response to destructive populist currents, which are based on the spread of hate speech and questioning the foundations of coexistence, is to establish cooperation between different countries. In this context, and in order to renew the mechanisms of the current democratic model and its operating methods, Mr. Mayara underlined the importance of encouraging civil society as a force for proposing and controlling government action. He also underlined the need to build partnerships that contribute to the promotion of democratic practice through openness to relevant national and international institutions, and to benefit from the best parliamentary experiences. According to Mayara, president of ASSECAA, it is also necessary to adapt national legislation to the international context, to support education and supervision and strengthen the representativeness and integration of women and young people in politics. The Kingdom is represented at the 143rd Assembly of the Inter-Parliamentary Union (IPU) by a large parliamentary delegation, led by the speakers of the House of Representatives, Rachid Talbi Alami, and of the House of Advisors, Enaam Mayara. The Assembly will adopt resolutions on the emergency item and on the subject item taken up by the Standing Committee on Democracy and Human Rights entitled Legislation worldwide to combat online child sexual exploitation and abuse. The Assembly is expected to conclude with the adoption of an outcome document on the overall theme of the General Debate. The IPU is the global organization of national parliaments. It seeks to promote democratic governance, institutions and values and work with parliaments and parliamentarians to articulate and respond to the needs and aspirations of the people.