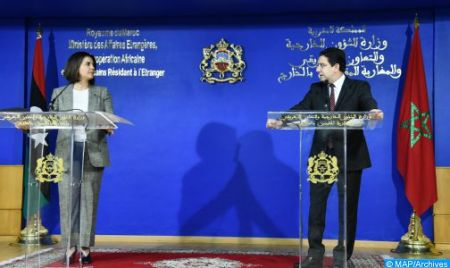 Minister of Foreign Affairs, African Cooperation and Moroccans Abroad, Nasser Bourita held, Sunday, a telephone conversation with the Libyan Minister of Foreign Affairs, Najla Al-Mangoush. On this occasion, Bourita reiterated the strong support of the Kingdom, in accordance with the High Instructions of HM King Mohammed VI, to the government of national unity and Libyan institutions, as well as to their efforts to hold elections in a global, participatory and pragmatic framework, able to contribute to efforts to achieve a final solution to the crisis that will ensure stability and development of Libya, said a statement by the Ministry of Foreign Affairs, African Cooperation and Moroccans Abroad. In addition, added the statement, the Minister congratulated the government of national unity, led by Abdelhamid Debaibah, for the wisdom it has shown since it took office. The telephone conversation was an opportunity for the two ministers to consult and coordinate on regional and international issues, according to the same source. It specified that “within the framework of the solid fraternal relations uniting the Kingdom of Morocco and the brotherly State of Libya, Mangoush informed her Moroccan counterpart that Libya decided to withdraw its candidacy to sit on the Peace and Security Council of the African Union for the 2022-2025 mandate, to renounce it in favor of the Kingdom of Morocco and to support the Moroccan bid”, noting that this decision will be formally communicated to the Commission of the AU. The two ministers also discussed the situation within the Community of Sahel-Saharan States (CEN-SAD), reiterating their willingness to coordinate in order to give a strong impetus to this organization and promote the return of its institutions to work in their official and natural seats in Tripoli. Established in February 1998 in Tripoli, CEN-SAD comprises several bodies, including the Conference of Leaders and Heads of State, the highest authority of the community, the Executive Council composed of ministers in charge of foreign affairs, the economy and the interior, in addition to the General Secretariat, which represents the administrative and permanent body of the organization and is based in Tripoli. CEN-SAD also has a counter-terrorism center based in Cairo, as well as the Sahel-Saharan Bank for Investment and Trade (BSIC), in addition to the organization’s Economic, Social and Cultural Council.