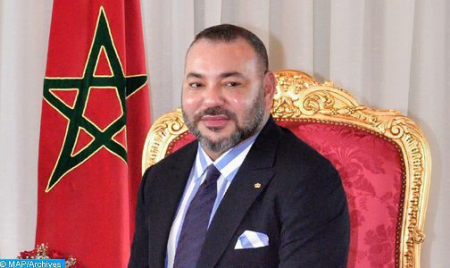 HM King Mohammed VI has called for building trust between Palestinians and Israelis with a view to settling the Palestinian issue, stressing that Morocco will press ahead with its efforts in order to ensure the right conditions for a return of the two sides to the negotiating table. “I therefore call, once again, for the launching of an intensive and effective diplomatic effort to get the parties back to the negotiating table in order to settle the Palestinian issue within the framework of the two-state solution and thus build a promising future for upcoming Palestinian and Israeli generations,” said the Sovereign in a message to the Chairman of the Committee on the Exercise of the Inalienable Rights of the Palestinian People, H.E. Cheikh Niang, on the occasion of the International Day of Solidarity with the Palestinian People. In this regard, the Sovereign called on the international community to help the two parties build trust and refrain from any practices that undermine the peace process, recalling that seven years have now passed since direct negotiations between the Palestinian and Israeli sides stopped. “During that period, trust between the two parties has vanished.

That trust could have been leveraged to implement the solution desired by the international community,” HM the King pointed out that the impasse in the Middle East peace process places a heavy burden as well as a great responsibility on the international community – and more particularly on the influential countries – to overcome the complex, intertwined obstacles that prevent any breakthrough in the political domain. Until the appropriate conditions for a settlement of the conflict are in place, trust between the two sides must be nurtured, the Sovereign underlined, noting that Morocco will press ahead with its efforts – building on its status and its constructive relations with all the parties concerned and with the influential powers – in order to bring about the right conditions for a return to the negotiating table as the only means to put an end to the conflict and ensure security and stability in the Middle-East region. “However, no matter how sincere the intentions may be, no effort can succeed in the face of unilateral measures that destroy the chances of peace and fuel violence and hatred,” HM the King said, who reaffirmed Morocco’s immutable position regarding the justness of the Palestinian cause, which remains the central element of the conflict in the Middle East. “I should like to point out, in this respect, that the Moroccan position does not change according to circumstances; nor is it governed by some pointless political outbidding tactics. Rather, it is the embodiment of a conviction which is deeply rooted in the consciousness of the Moroccan people and which is backed by serious, purposeful diplomatic endeavours as well as tangible work on the ground for the benefit of the just cause of Palestine and of Al-Quds al-Sharif,” the Sovereign pointed out. The region’s stability and prosperity hinge on achieving an equitable, lasting solution to this just cause, in accordance with the two-state solution based on the June 4, 1967 borders and in keeping with the resolutions of international legitimacy, the Sovereign stressed. HM the King also called for the preservation of the Arab and Islamic identity of Al-Quds as well as its legal, demographic and historical status.

“It is important to make sure the holy city is open to the followers of the monotheistic religions, who should coexist in an environment where fraternity, affection and peace prevail,” the Sovereign said. In his capacity as Chairman of the Organization of Islamic Cooperation’s Al-Quds Committee, the Sovereign has been doing his utmost and using all possible means to preserve the special, unique status of the holy city as a the meeting point of the three revealed religions and as a common heritage of humanity – a land of coexistence and cohesion, as stated in the Appeal for Jerusalem, which HM the King signed with His Holiness Pope Francis during his visit to the Kingdom of Morocco on March 30, 2019. Regarding Palestinian reconciliation, which is still not back on track, HM the King reiterated his call for the Palestinian brothers – whatever their affiliation – to put aside their differences and expedite Palestinian reconciliation so as to serve the lofty national Palestinian goal.

The Sovereign expressed his full support for the Palestinian National Authority, under the leadership of President Mahmoud Abbas, in its efforts to fulfil the aspirations of the Palestinian people for freedom, independence, unity and prosperity. “I commend the esteemed Committee on its sincere endeavours and reiterate my full support for its praiseworthy efforts to uphold legitimate Palestinian rights and contribute to the action of the international community to achieve peace, stability, coexistence and prosperity for the benefit of all peoples in the region,” the Sovereign pointed out.