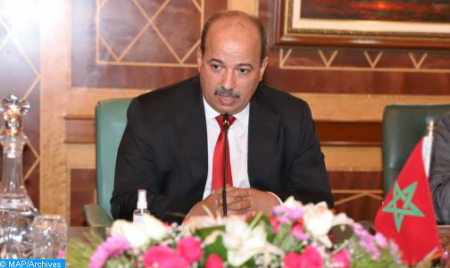 Speaker of the House of Advisors, Enaam Mayara, who also chairs the Association of Senates, Shoura and Equivalent Councils of Africa and the Arab World (ASSECAA), held, Saturday in Madrid, a series of meetings with presidents and vice-presidents of several African senates, focused on the consolidation of joint parliamentary action and the action plan of ASSECAA for the year 2022. Mayara met with the president of the Senate of Burundi, Emmanuel Sinzohagera, the president of the Senate of Kenya, Kenneth Makelo Lusaka, the vice-president of the Senate of Rwanda, Esperance Nyirasafari, and the vice-president of the Senate of the Democratic Republic of Congo, Eddy Mundela. During these meetings, held on the sidelines of the 143rd session of the IPU Assembly, emphasis was placed on developing the work of the ASSECAA as a forum for dialogue and debate to defend the common interests of African and Arab countries. On this occasion, Mayara noted the importance of ongoing consultation and coordination between member countries to strengthen ties between the parliaments of the two regions and strengthen relations of cooperation and partnership in different areas. In this context, the speaker of the House of Advisors reiterated his commitment to work to give a new impetus to inter-regional cooperation through the support and accompaniment of the efforts of Arab-African parliaments and the defense of their causes in international forums and within regional and international organizations. Mayara took this opportunity to reiterate the proposal on the establishment of an Arab-African parliamentary economic forum bringing together businessmen, representatives of chambers of commerce and industry in both regions, ensuring that the objective is to revive parliamentary economic diplomacy, especially in the context of the pandemic related to Covid-19. In addition, he stressed the need to strengthen bilateral action on the basis of constructive dialogue to consolidate South-South relations, set up as a strategic choice by HM King Mohammed VI. The talks also focused on the importance of setting up an action plan of the Association for the year 2022 with the program of many events and meetings in Morocco and in member countries. This action plan aims to strengthen ties between the parliaments of member countries and promote a common vision focused on socio-economic development and current challenges, he said. Mayara and speaker of the House of Representatives, Rachid Talbi Alami, who represent Morocco at the 143rd IPU Assembly, held a meeting with the president of the National Assembly of Sao Tome and Principe, Delfim Santiago Das Neves, focused on the consolidation of bilateral parliamentary action, especially on the continental level.