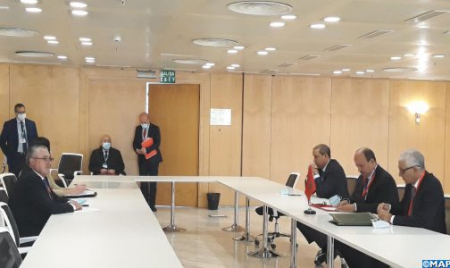 The 143rd Assembly of the Inter-Parliamentary Union (IPU) opened on Friday evening in Madrid, with the participation of Morocco. The Kingdom is represented at this meeting by a large parliamentary delegation, led by the speakers of the House of Representatives, Rachid Talbi Alami, and of the House of Advisors, Enaam Mayara. The opening session was marked in particular by addresses by King Felipe VI of Spain, the President of the IPU, Duarte Pacheco, and the Secretary-General of the United Nations, Antonio Guterres. At the invitation of the Parliament of Spain, the 143rd Assembly of the IPU and its related meetings is held in Madrid from 26 to 30 November 2021. All IPU statutory bodies, including the Governing Council, Standing Committees, Committees on the Human Rights of Parliamentarians and on Middle East Questions, as well as the Forum of Women Parliamentarians and the Forum of Young MPs, will convene during this Assembly. The General Debate will provide a platform for delegates to deliberate, exchange views and seek to galvanize parliamentary action to uphold and promote democracy around the world. The Assembly will adopt resolutions on the emergency item and on the subject item taken up by the Standing Committee on Democracy and Human Rights entitled Legislation worldwide to combat online child sexual exploitation and abuse. The Assembly is expected to conclude with the adoption of an outcome document on the overall theme of the General Debate. The IPU is the global organization of national parliaments. It seeks to promote democratic governance, institutions and values and work with parliaments and parliamentarians to articulate and respond to the needs and aspirations of the people.